Growth attrib­uted to sharp rise in number of people who went abroad in 2019
By Salman Siddiqui
Published: January 12, 2020
Tweet Email 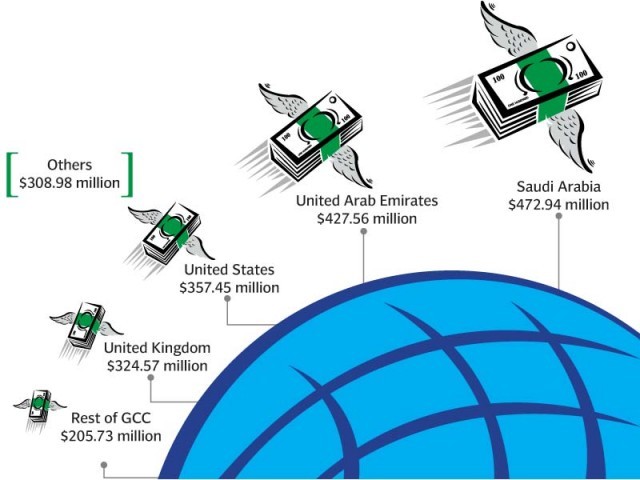 KARACHI: Remittances flow to Pakistan touched a seven-month high at $2.09 billion in December 2019 apparently due to a sharp increase in the number of people who found jobs abroad last year.

A banker, who heads the remittances department at a large bank, pointed out that a significant increase in Pakistanis taking up jobs in different companies abroad may have played a big role in boosting remittances to Pakistan. On average, over 1,700 Pakistanis found jobs in foreign countries every day in the year ended December 31, 2019 compared to over 1,000 people per day in 2018, according to a statement issued by the Bureau of Emigration and Overseas Employment (BE&OE).

“Present government improved diplomatic relations with Gulf states, which helped restore the confidence of foreign employers in the Pakistani workforce,” the BE&OE said in its mid-year (Jan-Jun 2019) analysis of manpower export.

Visits of Prime Minister Imran Khan to member countries of the Gulf Cooperation Council (GCC) also brought positive results as he urged the leadership of the GCC states to facilitate the Pakistani workforce.

The notable growth in remittances in December 2019 helped improve the overall remittances by 3% to $11.39 billion in first half (Jul-Dec) of current fiscal year 2019-20 compared to $11.03 billion in the same period of previous fiscal year, the SBP said.

He elaborated that the Pakistani workers abroad sent home higher amounts during winter holidays, which fall in December every year.

Many countries enjoy higher sales of consumer goods during the holiday season, especially during Christmas holidays. “This encourages the employers abroad to pay bonus in these months,” he said.

BE&OE numbers suggested that a majority of the Pakistanis found jobs in foreign countries as labourers followed by drivers. “The (seasonal) factor may continue to keep remittances at high levels in January as well,” the analyst said.

Secondly, the international crude oil prices have remained high in the ongoing fiscal year. “This has possibly boosted incomes of workers in the oil-exporting Middle Eastern nations where majority of the Pakistanis are employed,” he said.

The analyst added that his brokerage house had estimated an overall 3% improvement in remittances to around $22.5 billion in the full fiscal year 2019-20 compared to $21.83 billion in FY19.

Reasons for this may be comparatively higher cost of sending money through formal channels and the many questions asked by banks from the remittance senders, he added. Bankers and experts have estimated that the receipt of remittances through the illegal channels stood at around $8 billion a year.

A few months ago, the government launched a crackdown on operators of the illegal Hundi and Hawala money transfer system, ran a campaign to encourage the use of legal channels like banks and announced incentives for those utilising legal channels to remit money.

The crackdown helped increase remittances from different countries including the US and the UK, an analyst said the other day.