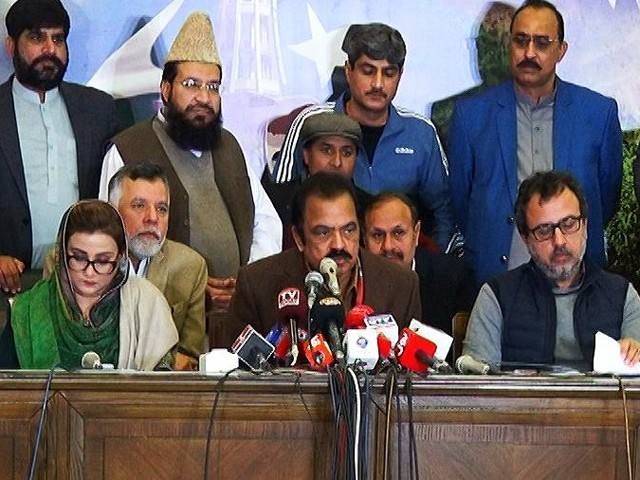 LAHORE: Pakistan Muslim League-Nawaz (PML-N) leader Rana Sanaullah on Saturday defended his party’s move to support the passage of the bills pertaining to the tenure of the services chiefs but conceded that it had made an “error” by acting in haste.

“We still stand by our stance of vote ko izzat do [respect the vote] and civilian supremacy. [Party supreme leader and ex-PM] Nawaz Sharif stands by it,” the PML-N leader told reporters as his party is facing harsh criticism for unconditionally supporting the bills, which swiftly sailed through both the lower and upper houses of parliament and signed into law by the president on Thursday.

The decision of the party’s leadership has left many in the ranks and files of the former ruling party red-faced, as they believe that the decision has practically smothered ideology of the party.

Sanaullah maintained that there was “undue haste” by the government to have the bills passed.

“The government suddenly called an emergency session [of parliament]. Then we found out that it had been called so that the Army Amendment Act could be passed in a single day,” he added.

“Our parliamentary became part of this undue haste. I think we made an error there. We should have stopped it instead.”

The PML-N leader said Nawaz had instructed the party not to become part of a decision taken in haste to avoid the impression of parliament turning into a rubberstamp.

Sanaullah further clarified that no party had opposed an extension in the army chief’s tenure and only had reservations over the procedure being followed by the government.

“[PPP Chairman] Bilawal Bhutto Zardari has expressed his reservations over the procedure. [JUI-F chief] Maulana Fazlur Rehman is also objecting to not taking him on board and becoming part of this undue haste. Otherwise, this is the same extension that was granted on August 10 [last year] and nobody had any problem with that.”

Is PML-N backtracking from its narrative?

Differences within the PML-N ranks over the ‘capitulation’ became visible when senior leader Khawaja Asif in a recent TV interview said the voters of the party were not mature enough to put up a fight for its narrative.

He said in India people had come out in large numbers to protest against the citizenship law but in Pakistan the supporters settled on tweeting instead of coming out on roads.

Asif lamented that the party diehards had not turned up in numbers in the GT Road rally as was expected by the leadership.

“Not even 100 people showed up at any given day when Mian Nawaz Sharif was in hospital,” he added.

In response to Sanaullah’s speech in the National Assembly on Friday, PM’s aide Firdous Ashiq Awan said the PML-N leader should stop creating the impression that he had been acquitted in a drugs smuggling case against him.

“The trial has yet to take place. Witnesses will testify and evidence will be presented after which the court will announce its verdict,” she told the media in Islamabad.