Social media is having a field day after the couple announ­ced they are 'steppi­ng down from the Royal family.'
By Entertainment Desk
Published: January 9, 2020
Tweet Email 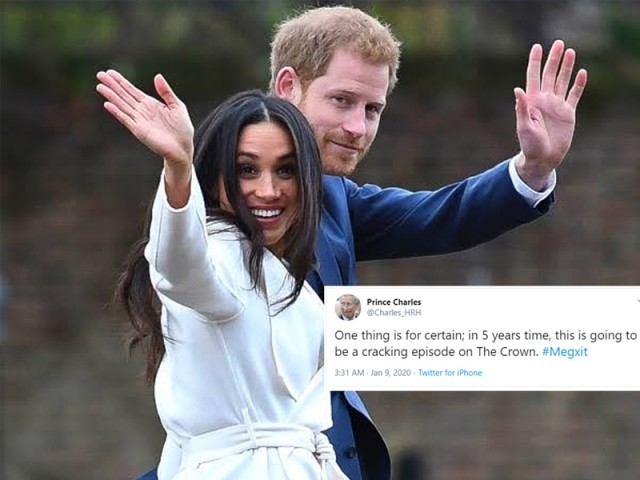 The start of the new year always welcomes reflection and renewal for most people, but Prince Harry and Meghan Markle take the cake by kicking off 2020 in a shocking way.

The Duke and Duchess of Sussex announced today that they will step back as ‘senior’ members of the Royal family and work to become ‘financially independent.’

In an official statement released on their joint Instagram account, the Royal duo revealed that in addition to stepping down, they’ll be splitting their time between the United Kingdom and North America.

“We aim to raise our son with an appreciation for the Royal tradition into which he was born, while also providing our family with the space to focus on the next chapter, including the launch of our new charitable entity,” they wrote on the share.

Naturally, Twitter is having a field day with the news. #Megxit is top trending across the social media platform, with users sharing their hilarious spin off the Royal duo’s new chapter.

Meghan Markle on the sets of The Crown season 8 to play herself #Megxit #MeghanMarkle pic.twitter.com/A0mtliJylA

The Queen to Meghan Markle after she snatched Prince Harry #Megxit pic.twitter.com/fByM711LoG

She really did that.

I mean if Meghan Markle and Prince Harry wanna come over here and rule America, I’m down with that. #Megxit pic.twitter.com/THCM4S6PEN

Prince Harry opened up about Meghan’s Royal hardships in a statement last October, writing, “There comes a point when the only thing to do is to stand up to this behavior, because it destroys people and destroys lives.”

“Put simply, it is bullying, which scares and silences people. We all know this isn’t acceptable, at any level. We won’t and can’t believe in a world where there is no accountability for this,” he said.

However, this hasn’t stopped Twitter from sharing their thoughts on the Royal decision. “Meghan and Harry NYC rent and move back,” one user mused.

meghan and harry gonna taste NYC rent and move back

Meanwhile, others are hilariously excited for the future seasons of The Crown and Succession. “Cast Meghan in the next season of Succession,” one said. Another wrote, “Can’t wait for season 6 of The Crown, in which Meghan could play herself.”

Cast Meghan in the next season of SUCCESSION

Can't wait for season 6 of The Crown, in which Meghan could play herself.

Others are just having a field day with all the creative memes the  #Megxit storm is circulating.

meghan markle in 2027 when she wins an emmy for playing herself in the crown season 8 episode about today pic.twitter.com/3WbpqUOwDx

Very brave of Harry and Meghan to pick January as the month to go freelance.