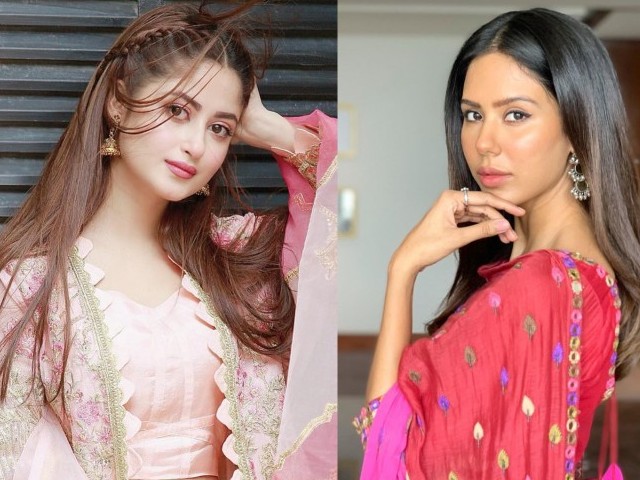 Sajal Aly is one of the most talented actors in Pakistan today, and her charm is revered widely. The actor made her Bollywood debut alongside Sridevi in the film Mom and has since acquired fans across the border as well.

The latest to admit that they’ve been cast under her spell is the Indian model/actor Sonam Bajwa, who is all set to make a cameo in Varun Dhawan and Shraddha Kapoor starrer Street Dancer.

Talking to BBC’s Haroon Rashid on his New Year’s podcast, Bajwa revealed just how much she loves Sajal and her talent. Gushing about the actor, Sonam said, “I’m the biggest, biggest fan of Sajal Aly. She is phenomenal and I feel so happy sharing that I’ve learnt so much from her, she’s extraordinary and I think you’d agree.”

She went on to ladle praise on to the Yeh Dil Mera  actor, saying how she feels inspired by her. “She’s the best and the finest actress of our times. I really look up to her,” said Sonam.

That’s not all though, Sonam’s love for Sajal stems from her overall love for the Pakistani entertainment industry. The model could hardly contain her excitement when talking about her connection with Pakistani dramas, and even revealed that she personally knows some celebs.

“I’m watching Alif, Mere Pass Tum Ho, Yeh Dil Mera. You’d be quite surprised, I live in Bombay but I mostly work in Punjab, it’s a small industry, we don’t have much to do or know but I know all about what’s happening in Pakistan’s entertainment industry. I know all the celebs, I know everything,” she reiterated.

She went on to mention how she has “some really close Pakistani friends, I know Sajal personally, Rabia Butt as well. I religiously follow Pakistani dramas and I think they’re so amazing.”

Ever grateful for the love and support, Sajal thanked Sonam in an Instagram story, which has since disappeared.

Christian Bale could be joining Chris Hemsworth in ‘Thor: Love and Thunder’