In Pakistan, growth of major sectors in LSM tumbles

In Pakistan, growth of major sectors in LSM tumbles 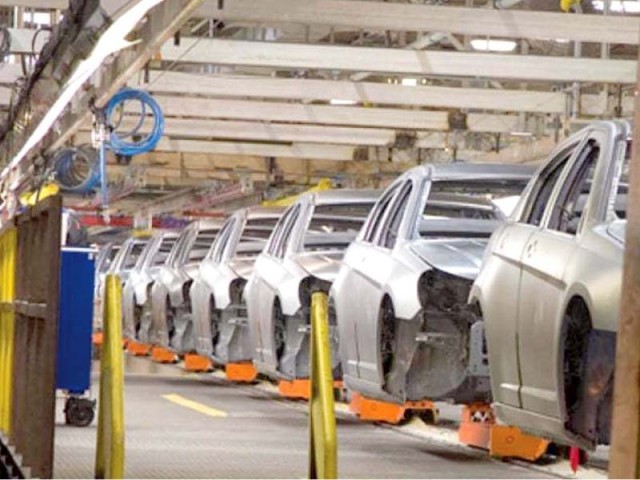 The growth of steel segment dipped 17% in the first quarter of FY20 due to a decline in construction activities in the country. PHOTO: REUTERS

KARACHI: Owing to rising financial and operational costs, the growth in major sectors in the large-scale manufacturing (LSM) segment including automobile, steel, chemical and cement remained on a downward trajectory in first quarter (Jul-Sept) of the current fiscal year.

“The impact of macroeconomic stabilisation policies and the second-round impact of exchange rate depreciation contributed to both supply-side pressures (expensive inputs) and lower demand (marginal growth in real incomes) for domestic industries,” stated the State Bank of Pakistan in its report “The State of Pakistan’s Economy – First Quarterly Report for the year 2019-2020”.

The growth of automobile sector contracted sharply by 34.1% in the first quarter of fiscal year 2019-20 compared to a slight decline of 1.2% in the same period of previous fiscal year, said the report issued on Monday.

During the quarter, players in the automobile segment hiked prices multiple times to meet the inflated cost of production. In June 2019, the rupee depreciated 6% against the US dollar, which added to the initial woes of existing players.

It added that the government also increased additional customs duty on automobile parts at a time when real incomes of the prospective customers fell owing to a slump in the economy.

In addition to this, the eight-year high interest rate of 13.25% also deterred consumers from availing car financing facilities.

“This behavioral shift became evident from the net retirement of Rs1.9 billion recorded under auto finance in the first quarter of FY20 as opposed to Rs5 billion uptake in the same months of FY19,” the SBP said. “This also contributed to a subdued demand for automobiles during the quarter.”

New entrants in the auto sector have also started production activities, especially in the car segment, at a time when the sector is experiencing a slump.

However, these newcomers as well as the existing players faced a testing period as the economy was going through a low growth phase, the report pointed out.

Suggesting recommendations for the sector, the SBP stressed the need for increasing the local parts content in automobile assembly, providing a level-playing field in the sector by doing away with the protective policies and addressing market frictions in the auto-financing business.

Following the trend of the auto sector, the growth of steel segment dipped 17% in the first quarter of FY20. The sector suffered because of the decline in construction activities in the country.

“The production of billets used in construction declined by around one-third compared to the first quarter of FY19,” the report pointed out. “Construction in the country slowed down primarily due to higher cost.”

According to the report, on the one hand, the depreciated rupee increased financing cost for the customers while on the other hand, it discouraged producers by restricting their pricing power as demand fell due to higher prices. Profit margins of the industry were squeezed as well, the report added.

The cement segment was another area affected by the ongoing economic slowdown. However, it received a relatively softer blow in growth – of negative 1.5% – compared to rest of the sectors.

The sector had recorded a growth of 0.1% in the same quarter of FY19. It displayed signs of improvement in September 2019 before which it reported dismal figures.

Cement exports helped the entire sector restrict the decline in growth, otherwise it would have witnessed a steep dip.

Citing the data released by the All Pakistan Cement Manufacturers Association (Apcma), the report noted that exports rose 17.6% in the first quarter of fiscal year 2019-20 compared to 13.8% growth in the corresponding quarter of previous fiscal year.

In February 2019, tensions between India and Pakistan escalated and as a result, cement exports to India declined.

“As exports to India tapered, exports of the finished commodity to Afghanistan and clinker to mainly African countries rose sharply, to the benefit of local producers,” the report said.

It added that exports of clinker grew 121.9% over last year, providing the much-needed boost to Pakistan’s cement sector, which had undertaken extensive capacity enhancement in the last few years.

The sector added over 20% to the overall capacity in the past two years.

During the quarter under review, domestic cement sales remained dull as public and private spending on infrastructure and housing remained subdued due to a higher cost of construction, cited the report.

Besides, large-scale developers, who rely on bank borrowing to fund their operations, held their investment owing to increase in financing costs, the SBP said.