Also sees drop in curren­t accoun­t defici­t that will be in range of 1.5-2.5% of GDP
By Salman Siddiqui
Published: January 7, 2020
Tweet Email 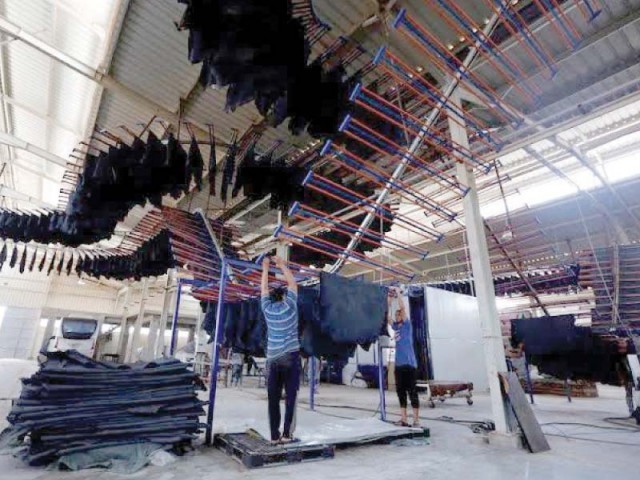 Corrections in the exchange rate helped export-oriented industries, as reflected in the relatively better performance of textile and leather. PHOTO: FILE

KARACHI: The State Bank of Pakistan (SBP) has voiced fear that the country will miss the economic growth target of 4% as two major sectors – agriculture and industries – have failed to perform well in the ongoing fiscal year.

The central bank, however, foresaw a notable drop in the current account deficit, projecting the deficit would remain in the range of 1.5% to 2.5% of gross domestic product (GDP) compared to the 3% target for the year.

The drop is expected on the back of a massive reduction in imports, which is expected to offset the impact of low foreign income on account of sluggish exports and stagnant workers’ remittances.

“Achieving the real GDP growth target of 4% appears unlikely,” the SBP said in its first-quarter (Jul-Sept FY20) report on the state of Pakistan’s economy released on Monday.

Earlier, the central bank projected GDP growth in the range of 3-4%, most likely 3.5%, in FY20. Such projection is, however, missing in the latest quarterly report, thus, strengthening doubts about economic slowdown to 2.4% in the year.

The country recorded a nine-year low GDP growth of 3.3% in the previous fiscal year ended June 30, 2019.

“In case of agriculture, targets for the overall crop sector may not be achieved as production of both cotton and sugarcane is estimated to remain lower than FY19 figures. The industrial sector is also expected to remain under stress. The latest large-scale manufacturing (LSM) estimates for October 2019 show an 8% decline on a year-on-year basis, steeper than the 5.9% drop recorded in the first quarter of FY20,” the central bank elaborated.

With the increase in financial and operational costs, a number of industries, including steel, automobile, chemical and cement, slashed their production levels. Furthermore, the government’s policy to shift away from furnace oil in power generation forced local refineries to scale back their operations, the SBP said.

In contrast, according to the central bank, previous correction in the exchange rate helped export-oriented industries, as reflected in the relatively better performance of textile and leather. Meanwhile, fertiliser production rose owing to improved supply of natural gas.

In the services sector, wholesale and retail trade activities were relatively subdued. Similarly, in case of transport, storage and communications, commercial vehicle sales and petroleum product sales to the transport sector both declined in the first quarter. By contrast, higher commercial bank profits in the first quarter of FY20 over last year may bode well for full-year prospects of the finance and insurance segment.

“The improvement in banks’ earnings primarily reflects the impact of rising interest rates and banking spreads, which increased their net interest income,” the SBP said.

The report also briefly expressed fear of a rebound in international oil prices. This stands as a huge threat to the already poorly performing domestic economy, which relies heavily on imported energy.

Under the IMF programme, Pakistan initiated the much-needed structural reforms to fix the faltering economy, but this badly impacted the domestic economy at initial stages.

The reforms included a surge in the benchmark interest rate to an eight-year high of 13.25% at present, introduction of a market-based rupee-dollar exchange rate regime, increase in petroleum product, electricity and gas prices for end-consumers.

Rupee-dollar parity – from volatility to stability

According to the central bank, the current account balance is expected to improve compared to the projections presented in the Annual Report for 2018-19. This mainly reflects a more-than-expected contraction in imports.

With the industrial sector under stress, its demand for imported raw material is expected to stay low. Commodity prices are also subdued amid a slowdown in the world economy and the absence of key triggers (resolution of the US-China trade dispute and Brexit).

On the flip side, the tepid global growth outlook and commodity prices may also weigh on both exports and remittances. Nonetheless, any negative impact on these earnings would be more than offset by the reduction in import payments.

“On balance, therefore, the current account deficit for FY20 is likely to stay within the range of 1.5-2.5% of GDP,” the central bank said.

Also, the government’s decision to postpone regulatory actions for implementing the CNIC condition for businesses till February 2020 (and also the axle load management), may ease manufacturers’ operational constraints to some extent.

In case of inflation, pressures are expected to recede in the second half of the current fiscal year, in light of a continued softness in domestic demand (which is expected to keep core inflation in check), and stability in the exchange rate on the back of improving current account deficit and financial inflows.

Accordingly, the SBP kept its projection for inflation at 11-12% for the full fiscal year. “This forecast is subject to upside risks in the form of a reversal in global crude prices, exchange rate depreciation and increased budgetary borrowings,” it said.

On the fiscal front, the improvement came from a healthy growth in both tax and non-tax collections and containment in current spending, both at the federal and provincial levels.