One 250 grams portio­n of siri paey costs around Rs300 to Rs400 in the metrop­olis
By Hafiz Shahid Munir
Published: December 29, 2019
Tweet Email 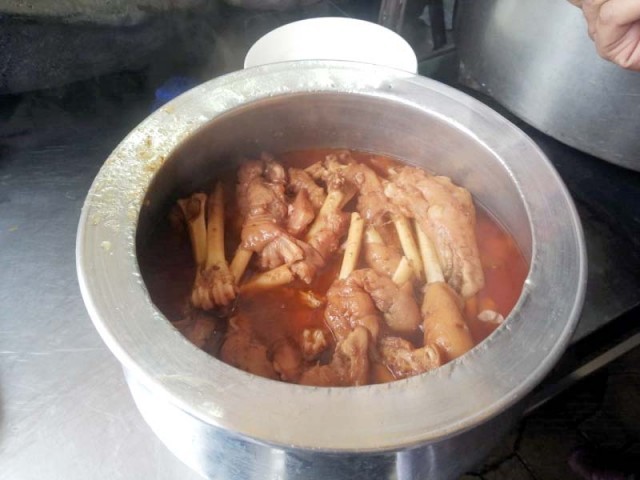 GUJRANWALA: Head and trotters of herbivores is a centuries old delicacy relished in the relatively modern city of Gujranwala. The 18th century metropolitan boasts the best siri paey (brain and trotter dish) in the entire province.

The dish has remained relatively unchanged over the years, apart from its variation of paey biryani which is only served during special occasions owing to its extraordinary cost.

Traditional siri paey are served all over Gujranwala but three famous restaurants that were established in the 1960s rule over the industry.

Two of these shops, Al Ghani and Naseem, are located on millennia old Grand Trunk (GT) Road route, while the third one, Bashir, is located inside the city.

These three shops sell around 100 to 200 kilogrammes of siri paey each day. The demand remains constant throughout the year regardless of seasons. One 250 grams portion of siri paey usually costs around Rs300 to Rs400 in the metropolis.

Hamza, a resident of Gujrat, said, “My friend and I come at least once a week to relish the flavours of Gujranwala’s siri paey, naan and lassi. The flavours are exquisite, though I wish the service gets better too.”

Another customer, Riaz Ahmed, lining up for their portion said, “If you want to enjoy siri paey, make sure you get up in the morning and rush to the shop before noon. The stock runs out really quick in all the restaurants.”

In Gujranwala, breakfast timings last till noon. Residents flock to these restaurants along with their families to savour the Mughal era delight. 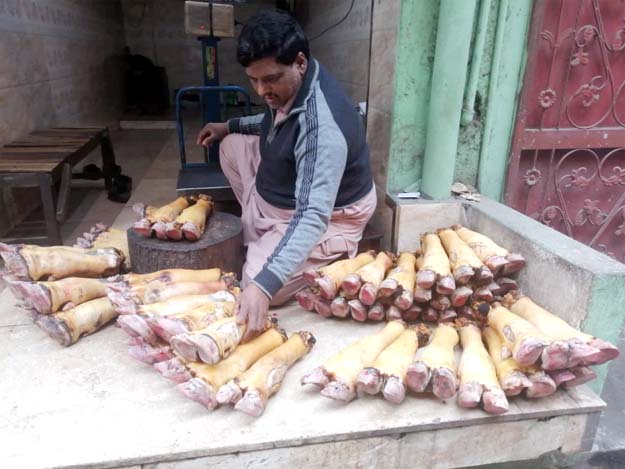 “We challenge others to beat siri paey flavour of our city.  People from all over Pakistan and abroad love this traditional meaty dish. ” Ali Hassan, a local resident, said.

The metropolitan has two associations with a total strength of 1,000 members that regulate the siri paey business. The first, Mutton Siri Paya Association, flaunts sales of nearly 1,000-1,200 kilogrammes of 20,000 units of paya (trotters). Whereas, 5,000 siri (heads) amounting to almost 6,250 kilogrammes are sold each day to the consumers.

The association’s lead, Liaqat Jidran, revealed that the organisation has over 400 members.

The second association is known as Beef Siri Paya Association and its 600 members are led by President Younus Bhatti. “Nearly 800 kilogrammes of beef trotters and 1,000 kilogrammes of heads are consumed in the metropolitan every day,” the president told The Express Tribune.

The raw trotters are bought from the dealers at an affordable cost of Rs100-150 per piece. After cooking, restaurants may earn up to Rs200-300 profit on each trotter.

Shopkeepers rack up a net profit of around 400% on siri as well. Raw heads are sold by dealers at Rs200 per unit, later, the parts are sold separately amounting to a total of Rs1000.

The standard price of tongue is Rs200, while the brain and jaws are sold at Rs400 and Rs200, respectively.

The district of Gujranwala brags a population of more than 5 million people as per the latest census. The number rose from 3.4 million people in 1998. The astounding growth in population serves as good news for the food business but a threat to the not so rapidly expanding food production industry.

Nevertheless, the siri paey that warms up people in Gujranwala will continue to rule the hearts of masses like that of kings.