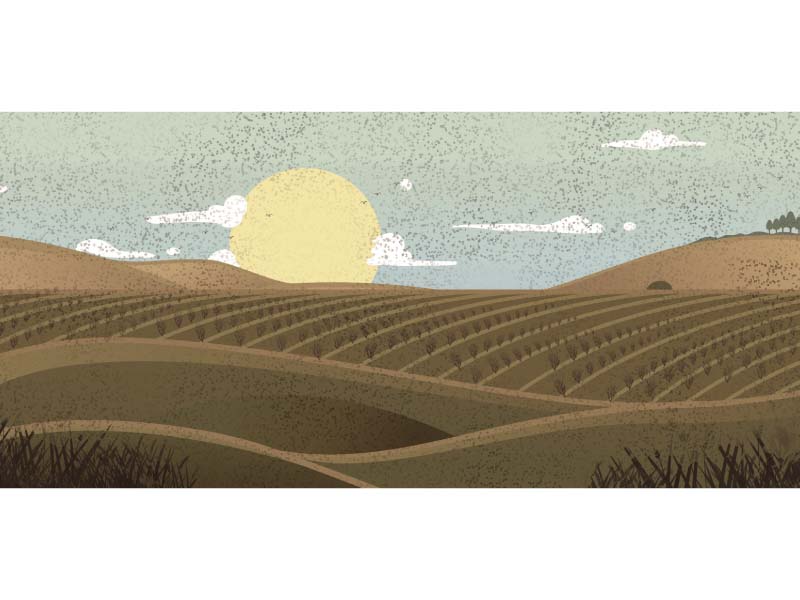 Sounding cautious, Pakistan-based economists had dismissed a further slowdown in the national economy months ago, expecting that better water availability would lend much-needed support to the agriculture sector – a key component of the economy.

However, a massive surge in fertiliser prices, impact of climate change and locust attack played havoc with the optimism. These factors are set to turn the economists’ little doubt into a major worry.

“A study suggests that the agriculture sector performance has continued to decline for the past 19 years. The sector is feared to continue the downward trend in the 20th straight year – FY20,” Sindh Abadgar Board (SAB) Senior Vice President Mahmood Nawaz Shah told The Express Tribune.

The share of agriculture sector – crops and livestock – in the gross domestic product (GDP) was around 21-22% in recent years. “It (agriculture sector) may hardly retain a share of 18-19% in GDP this year (FY20),” said Agri Forum Pakistan Chairman Ibrahim Mughal.

Acute shortage of water did not let the agriculture sector perform well last year – FY19. This year, the availability of water was not an issue but a “massive increase in fertiliser (urea and DAP) prices by up to 25% has badly hit agricultural (crops) output as high prices discouraged farmers from using a good quantity of fertiliser.”

He estimated that production of almost all major crops of the 2019 Kharif (summer) season including cotton, sugarcane, paddy and maize “has dropped 30% on an average compared to last year.” Giving the breakdown, he said the production of food crops, including wheat, rice, maize, sorghum and millet, decreased 10-20%. “This is the reason why the price of wheat flour (No 2.5) has shot up 30% to Rs52 per kg this year compared to Rs40 per kg last year.”

He expressed fear that a wheat and wheat flour crisis was brewing. Last year, the government did not procure the required amount of wheat for its buffer stock, which was necessary to stabilise prices in the market.

“That’s why the wheat price has shot above Rs40 per kg against the support price determined by the government of Rs32.50 per kg last year.”

The government has set the new support price at Rs34.12 per kg for FY20. Cash crops, including cotton and sugarcane, have underperformed this fiscal year too. Cotton harvest is estimated to have touched a multi-year low in FY20 compared to 9.86 million bales – one bale is equal to 170 kg – in the last fiscal year. It was 17.5% lower than the 11.94 million bales harvested in FY18. 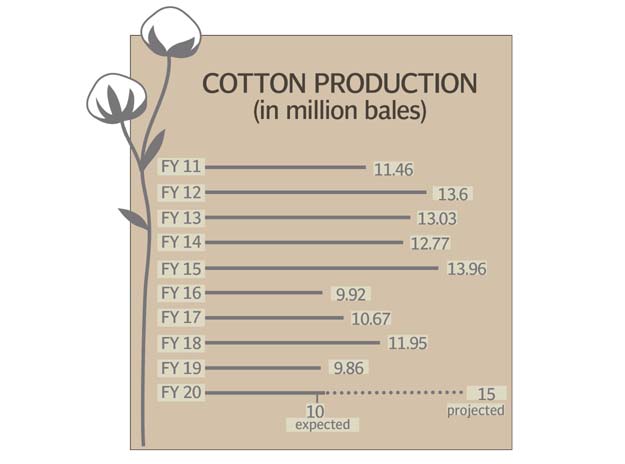 The country’s total cotton requirement stands at around 14 to 15 million bales, which was achieved about five years ago.

Same is the case with sugarcane. Its production is estimated to have dropped further this year. The output fell 19.4% to 67.17 million tons in FY19 compared to FY18.

Production of pulses and oilseeds has dropped 25-30%. “Not a single type of pulse is available for less than Rs150 per kg in retail, though the government has spent over Rs30 billion on their imports in the first five months (Jul-Nov) of FY20.”

He held provinces responsible for the continued poor performance of the agriculture sector since farming had become a provincial subject under the 18th Constitution Amendment in 2010.

“No agriculture policy, no planning and a lack of will at the provincial levels were behind the pathetic performance. Provincial authorities have given the agriculture sector in the hands of inexperienced people,” Mughal said.

Temperature was extensively high, especially in northern Sindh districts of Dadu, Larkana, Qambar Shahdadkot, Shikarpur and Sukkur. “This has damaged 20-25% of paddy crop in such areas.”

Secondly, the torrential rains just before the first round of cotton picking hit the standing crop in fields in September.

Farmers used to make three to five cotton picking in one season. However, the rains in the range of 11 to 15 inches in a 40 to 45-day period in some districts damaged a significant portion of the crop. Besides, high temperature in the cotton-growing areas in Punjab also did not let farmers harvest a good crop. “The situation did not allow achievement of the cotton output target for the season,” he said.

“The high temperature has also widely impacted the maize crop in Punjab,” he said.

Only sugarcane crop has managed to perform better this year. Its harvesting has started in recent days and weeks. “Torrential rains have positively impacted the sugarcane output (in Sindh) as the crop is rain-resilient (all over the world),” he said.

The current year has seen tomato and onion crisis as well. Their prices hit historic highs of Rs400 per kg and Rs100 per kg in retail, respectively, in the year. “Rains have affected about 30-40% of the early crop of onion and damaged the entire crop of tomato, which is a very sensitive food crop.”

Apart from these, the arrival of locusts in Sindh and a few adjoining areas in lower Punjab has sparked fears among the farmers.

“Locust attack has damaged the chilli crop, has added to the miseries of cotton growers and has the potential to impact the wheat crop, which is in the last stages of sowing these days,” he said. Citing anecdotal evidence, he believes the locust attack may not badly impact the wheat crop on a wide scale. “However, whenever and wherever they attack, they completely destroy the crop. I know the farmers who planted wheat three times this season, but the locust attack devastated the crop on all occasions.”

For instance, if the locust attack damages 2% of the area cultivated with the wheat crop, it may appear small on the macro scale, but it will be huge for the farmers who suffer. Farmers have planted the crop over 2-2.2 million hectares of land in Sindh.

“If the wheat crop fails to find favourable weather, the locust attack may hit its production over a wide area like it did in the case of cotton.”

Both the federal and provincial governments have done virtually nothing to stave off the threat from the insect.

“There is no damage assessment after the locust attack. However, when you will pass through Mirpurkhas district, you will find locusts both at your right and left …and in Nawabshah and Sukkur towards border areas (with India).”

“In a nutshell, I don’t see any improvement in the agriculture production this year too, but a further decline. Poor output of cotton and maize will contribute substantially to the overall decline.” Economist Dr Ashfaque Hasan Khan said months ago if the agriculture sector failed to perform this year too, the GDP growth may slip below 3%.

Economist Dr Hafiz Pasha said if the sector continued to underperform, it would be hard for the country to achieve GDP growth of 2.4% anticipated by the International Monetary Fund (IMF) for FY20.

The country recorded a nine-year low GDP growth of 3.3% in FY19.