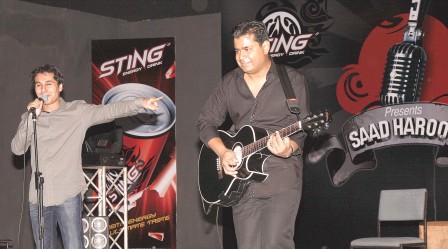 LAHORE: The energetic and eloquent comedian from Karachi delivered just the dose of laughter that the tightly-packed audience at Lahore’s Ali Institute needed on Saturday night.

Right from the get-go Saad Haroon commanded the audience’s attention and took the crowd through a fast-paced journey of improvisational comedy, political satire and social oddities.

Despite the technical glitches and bad lighting the versatile and animated comedian moved effortlessly between stand-up, improvisation and song and dance. The captive spectators were enthralled and laughed, booed and applauded in reaction to every joke and movement as Haroon incorporated glitches into his act.

“I loved how he invited crowd participation”, said Saad Yousaf, a spectator. “Some of the best jokes were about members of the audience; I especially liked how he just came in, spotted two foreigners and mixed his script with improvisation.

To me that showed that he was capable of comedy without the cover of a pre-rehearsed act.”

“Saad was just so spontaneous”, added Mariam Mehdi, another member of the audience. “For me the songs were the highlight of the performance. I cramped my stomach laughing when he took audience remarks, padded them into his song and still managed to stay in tune.”

Apart from the predictable jokes about terrorism and Punjab Governor Salmaan Taseer’s sunglasses, Saad Haroon understands his niche and their taste in popular culture well.

“In Karachi people happily pay Rs1,000 to come to an event of this nature. In Lahore, it was a little hard convincing people to pay even Rs300. Lahore needs to acquire a taste for stand-up comedy,” said Saad Haroon. “Personally for me, stand-up comedy started after I returned to Pakistan immediately after the September 11 attacks. It stemmed out of boredom and the conditions surrounding me. More than making a political point, I just want to make people laugh,” he said.

An organiser said, “The only thing that takes place in Lahore is launches. I believe Lahore needs to develop a more diverse taste in art. Saad has performed at the Lahore University of Management Sciences for Shark and Blackfish before but he has never performed on such a large platform.”

The three-day event titled ‘This is Stand-up Comedy’ kicked off with a solo performance by Farhad Humayun and subsequent cover songs by singers and musicians Hassan Jamil and Sarah Waqar. Humayun’s brief drumming session was an ill-timed audience warm up and if the audience’s sing-along and enthusiastic applause can be a gauge of success then it was amateurs Jamil and Waqar who were a bigger hit.

Haroon opened the act with the comment, “You know you’re famous when white people come to your show, but you’re a worthy act only when Lahoris delay dinner to come see you.”

For a depressed city, the laughs were just what the doctor ordered.

Storytellers from the slums