India has abandoned the ‘idea of India’

India has abandoned the ‘idea of India’

The respec­t that India had gained by follow­ing an inclus­ive system of govern­ance is being lost
By Shahid Javed Burki
Published: December 23, 2019
Tweet Email 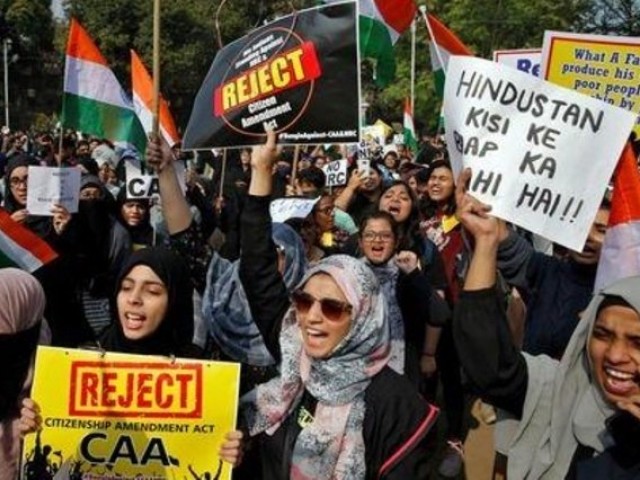 Demonstrators shout slogans during a protest against the National Register of Citizens (NRC) and a new citizenship law, in Kolkata, India. PHOTO: REUTERS/FILE

I am one of those students of Pakistan’s history who were impressed with the Indian governance experiment. That was based on what the historian, Sunil Khilnani, called the “idea of India”. It was a simple idea. The first generation of Indian leadership led by prime minisiter Jawaharlal Nehru believed that they had to find a system of political, social and economic governance that served a very diverse population. At the time India took its first census in 1951, the proportion of Hindus in the country’s population was 84.1% with Muslims accounting for 9.8%. Christian and Sikhs were the third and fourth largest religious groups accounting for 2.3% and 1.8%, respectively. According to the 2011 Census the proportion of Hindus had declined to 79.8% while that of Muslims had increased to 14.2%. There was no or little change in the Christian and Sikh shares. As discussed later, this significant increase in the Muslim share deeply concerns Hindu extremists.

Religion was not the only dividing factor in India. There was no single dominant language. Dozens were spoken in the country. And then there was the highly divisive caste system that placed what the British rulers called the “scheduled castes” at the bottom of the social hierarchy. Mohandas Gandhi, India’s patron saint, changed the name of the low castes to “dalits” or the children of god. BR Ambedkar (1891-1956), the architect of the Indian Constitution, belonged to a lower caste.

The “idea of India” gave equal rights to all citizens. It also provided special treatment in government employment and access to public educational institutions for those who were socially and economically backward. The system was strengthened by Nehru while he served for 17 uninterrupted years as the country’s prime minister. But the challenge came with the rise of the Rashtriya Swayamsevak Sangh (RSS) founded in 1925 by KB Hedgewar, a physician from central India. The organisation’s founding coincided with the rise of the Nazi party in Germany. Hedgewar borrowed extensively from the Nazis, including the type of uniform worn by its members and the military training they received. The RSS believed that India’s Muslims were descendants of Hindus who had been converted to Islam by the use of force and so their faith was of questionable authenticity. Hindus were entitled to rule over minorities.

It was the “idea of India” as the guiding principle behind governance that brought peace quickly to the country that had been torn apart by the partition of the British colony. There was agreement across the land that equal rights to all citizens inhered in the system the country had adopted. During the 1947 Partition, a little before it and a little after it, millions of people were killed in communal riots and many more moved across the newly defined border. Eight million Muslims went to Pakistan while six million Hindus and Sikhs moved to India from what was now Pakistan.

A number of initiatives by Prime Minisiter Narendra Modi and Amit Shah, the head of the BJP and the new Home Minisiter, are killing the idea of India. The moves include the repeal of Article 370 of the Constitution that gave special rights to Kashmir and the states’ mostly Muslim citizens. A few months later the country’s Supreme Court awarded the land on which the centuries old Babri Mosque once stood. This was at a place called Ayodhya in the state of Uttar Pradesh. This was followed by the adoption by Parliament of a new citizenship law that allowed all non-Muslim minorities fast track to become the country’s citizens. This right was explicitly denied to Muslims.

In a lengthy article published by The New Yorker, in its issue of December 9, 2019, Dexter Filkins, a highly regarded American journalist who writes on South Asia, painted a grim picture of the direction in which India was moving. “For the R.S.S., the initiative in Ayodhya paid off spectacularly. Membership soared and by 1996 the BJP had become the largest party in parliament,” he wrote. In the article, Filkins referred to a conversation he had with Ashis Nandy, a prominent Indian intellectual who had begun a series of interviews with RSS members. Nandy wanted to study the mentality of the rising Hindu nationalists.

He interviewed Modi for several hours and came away shaken. Nandy told Filkins that Modi “exhibited all the traits of an authoritarian personality: puritanical rigidity, a constricted emotional life, fear of his own passions, and an enormous ego that protected a gnawing sense of insecurity”. Nandi is a trained psychologist and offered a diagnosis on Modi’s state of mind in clinical terms. “During the interview, Modi elaborated a fantastical theory of how India was the target of a global conspiracy in which every Muslim in the country was likely complicit, ‘Modi was a fascist in everysense,’ Nandy said. ‘I don’t mean this as a term of abuse. It’s a diagnostic category’.”

The monumental changes in the thinking of political elites about the role of religion in India’s mode of governance will affect Pakistan. With emphasis now on India’s Hindu identity, the country’s difficult relations with Pakistan that has South Asia’s largest Muslim population will become — in fact, has become — even more troublesome. India is now treating its large Muslim population in a way separate from the way it treats people from other religious minorities. This group of some 185 million people is being reduced to an inferior status.

“The idea of India that emerged from the independence movement” said a letter signed by more than 1,000 Indian intellectuals, “is that of a country that aspires to treat people of all faiths equally”. But the law, the intellectuals said, is a “radical break with this history” and will “greatly strain the pluralistic fabric of the country”. Its passage was accompanied by the move in the northeastern state of Assam along the Bangladesh border where all citizens were required to produce documentary proof that they or their ancestors had lived in India since 1971. According to one newspaper account “round two million of Assam’s population of 33 million — a mix of Hindus and Muslims — failed to pass the test and these people now risk being rendered stateless. Huge new prisons are being built to incarcerate anyone determined to be an illegal immigrant”. The respect that India had gained by following an inclusive system of governance is being lost. The United States Commission on International Religious Freedom, a federal body, called the new Indian law “a dangerous turn in the wrong direction” and said that the United States should consider sanctions against India.