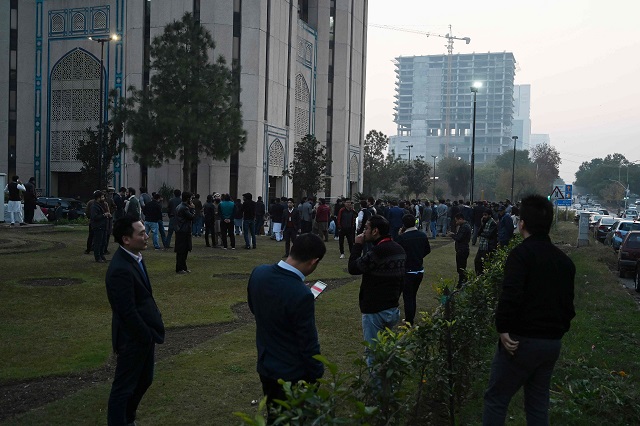 People gather outside buildings after a earthquake in Islamabad on December 20, 2019. PHOTO: AFP

A 6.4-magnitude earthquake on Friday jolted northeast and northwestern parts of Pakistan and parts of Azad Jammu and Kashmir, sending thousands of panicked people onto the streets

Huge shocks were also felt in Mirpur, Kotli, and other districts of Azad Kashmir. However, no causalities have been reported so far.

As per the PMD, the magnitude of the quake was recorded at 6.4 with a depth of 210 kilometres. Its epicentre was in the Hindu Kush region in Afghanistan.

The US geological survey, however, has reported a slightly lower reading of 6.1.

The 6.1-magnitude quake hit 51 kilometres (30 miles) southwest of Jurm in northern Afghanistan and was over 200 kilometres deep, USGS said

As per Indian media reports, tremors were felt in the capital New Delhi, Mathura, Lucknow, Prayagraj, occupied Kashmir, and several other parts of North India.

Pakistan is among the most earthquake-prone regions in the world. The country is located on the Eurasian Tectonic Plate, which is known for high levels of seismic activity.

This September, over 40 people were killed and more than 300 injured after a strong earthquake rocked Mirpur in Azad Kashmir.

In October 2005, a massive earthquake killed over 80,000 people in Azad Kashmir and Khyber Pakhtunkhwa.