Hong Kong prides itself on having one of the world's best transp­ort system­s but deadly bus accide­nts are not unknow­n
By AFP
Published: December 18, 2019
Tweet Email 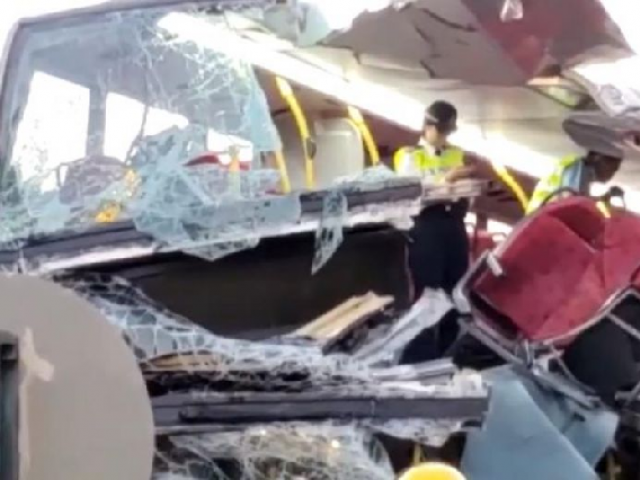 HONG KONG: Five people were killed and dozens injured in Hong Kong on Wednesday when a double-decker bus smashed into a tree, police said.

Live footage showed firefighters trying to reach victims on the vehicle’s top deck, which had been turned into a tangled mess of twisted metal and shattered glass, leaving some passenger seats dangling to the side.

Victims were seen being removed in black body bags and placed next to a sign reading “Temporary Mortuary” at the roadside in Kwu Tung, a region close to the border with China.

Police said five people were certified dead at the scene with dozens injured.

The city’s Hospital Authority said it had activated its “major incident” plan in response to the crash.

One survivor dressed with a bandage around his head and right arm told local broadcaster TVB he was asleep when the crash happened.

“When I woke up I was already trapped in my seat,” the man said.

Hong Kong prides itself on having one of the world’s best public transport systems but deadly bus accidents are not unknown.

The densely-packed city has many winding, narrow and often steep roads. But unions say driver fatigue from working unforgiving hours is also commonplace.

Last year was an especially bad one for fatal bus crashes in Hong Kong.

A speeding double-decker overturned in northern Hong Kong in February 2018, killing 19 people, one of the worst bus accidents on record.

Five people were killed when a coach carrying Cathay Pacific staff to Hong Kong’s airport collided with a taxi in November.

In 2003 a double-decker bus collided with a truck and plummeted off a bridge, killing 21 people and injuring 20.