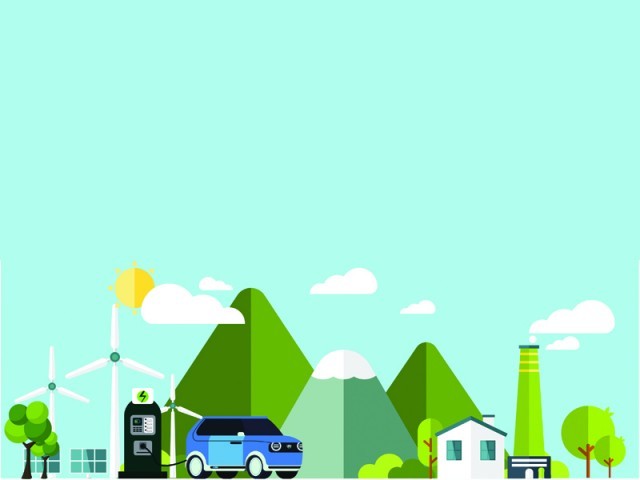 Electric mobility is expanding at a rapid pace throughout the world. illustration: mohsin alam

KARACHI: The automobile sector of Pakistan is expected to undergo a drastic transformation over the next decade as the government has approved the electric vehicle (EV) policy, paving the way for introducing such vehicles in the market of 207 million people.

The policy provides multiple incentives for electric vehicle manufacturers including a massive reduction in taxes from 43% to 11.25%.

Electric mobility is expanding at a rapid pace throughout the world. In 2018, the global electric car fleet expanded to 5.1 million, up 2 million from the previous year.

According to latest data of the International Energy Agency (IEA), China remains the world’s largest electric car market, followed by Europe and the United States. Norway happens to be the global leader in terms of electric car market share.

According to the electric vehicle policy, the demand for oil products will drop by millions of tonnes by the year 2030.

Qureshi is also heading SZS which has completed the first phase of a plant for the assembly of electric vehicles in Karachi.

According to him, total investment of only Rs2 billion will be needed to establish the electric vehicle plant with capacity to produce 20,000 vehicles annually on a double-shift basis. The plant, being established over 80 acres of land, will begin production next year.

Qureshi added that that the plant would be a composite one – which would be capable of producing electric bikes and vans as well in addition to the electric cars.

“Plants for conventional cars are more expensive to establish as they cost around 10 times more than an electric vehicle car plant,” he said. Talking about the electric vehicle policy, he was of the view that it would be a turning point for the industry and would also help alleviate pressure on the country’s current account deficit by reducing the oil import bill.

The government has approved the policy draft prepared by the Ministry of Climate Change. The draft, however, had faced stiff resistance from the Ministry of Industries and the Engineering Development Board (EDB).

“It is only a matter of time when Pakistanis will be able to drive electric vehicles in the country,” remarked Ehteshamul Haq, President of the Pakistan Electric Vehicles and Parts Manufacturers and Traders Association ((PEVPMTA). “People who are opposing this technology today will be using and investing in it in the days to come.”

EV Technologies official Shaukat Qureshi dismissed the notion that electric cars would be expensive, saying that such vehicles, equivalent to Suzuki Cultus and Toyota Vitz variants, would be sold at much lower prices than their oil-operated counterparts.

“Our V5 model, which can be considered an alternative to Cultus, will be sold at a price of Rs1.25 million following the reduction in taxes in the newly approved policy,” he said. “Prior to approval of the policy, we could not have sold it below Rs1.8-1.9 million.”

At present, the cheapest model of Cultus is being sold for Rs1.75 million in the market.

“The two variants of V9 model, which is equivalent to Vitz, will be priced at Rs1.5 million and Rs1.65 million respectively,” he added.

Talking about V9, he said the first variant would have a speed of 60 km and range of 160 km on a battery of 20 kilowatts. It would have a motor of 10 kilowatts per hour.

The second variant, with a speed of 80 km per hour and range of 160 kilometers, will have a motor of 7.5 kilowatts and battery of 18 kilowatts.

“In addition to this, yearly expenses of electric cars will be lower than those of 70cc petrol-powered bikes,” said Hussain. “In five years, fuel and maintenance expenses of V9 will be Rs181,200 given that it travels 100 km daily.”

“Even though passenger cars are important, electric buses will make the real difference as they will transport people on a mass level from one point to another or better say from one corner of the country to another,” said PEVPMTA Chairman Ehteshamul Haq.

Drawing comparison between an intercity diesel bus traveling 300 km daily and an intercity electric bus covering the same distance, he said the per litre diesel cost would amount to Rs127 while the electricity unit was priced at just Rs16.

Although electric vehicles are a good bet, the question of availability of electricity and electric infrastructure in Pakistan arises.

Normally people think about cars when electric vehicles are mentioned but buses will be the main consumer of electricity.

According to a study conducted by the National Transmission and Despatch Company (NTDC), the government plans to develop 120 new power projects by 2040 in a bid to add 74,448 megawatts of production capacity to the system. Most of this capacity will come from hydel, domestic coal and renewable sources including wind and solar.

In the year 2040, Pakistan’s energy demand is projected at 80,425MW while supply will stand at 98,091MW after the addition, according to the NTDC.

The current demand for energy in Pakistan stands at 26,270MW while the country generates surplus energy of 27,715MW with spare capacity of 17,600MW which remains to be utilised. As far as charging infrastructure for electric vehicles is concerned, some companies are mulling over investing in this area, said Shaukat.

“Total Parco, which has established 400 electric stations in France, is willing to set up the charging infrastructure for electric vehicles in Pakistan as well,” he said. “Total Parco is a major oil marketing company with 800 stations in Pakistan.” In this regard, the parent company of Indus Motor has signed a contract with BYD of China, a giant in the electric vehicle market, he added.