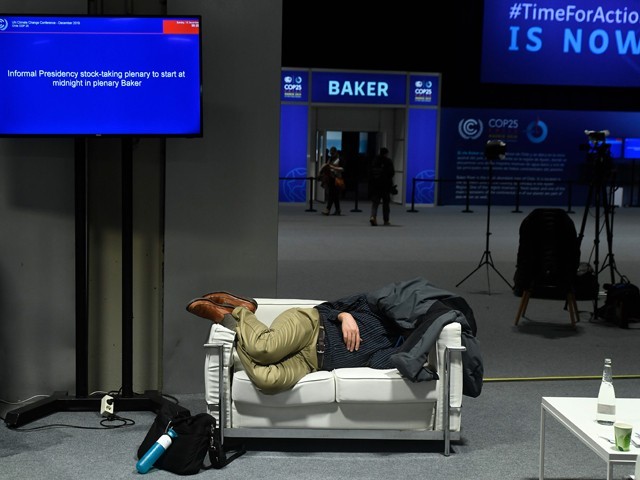 MADRID: A marathon UN summit came to a dismal end on Sunday after being extended for two days but very little to show, squeezing hard-earned compromises from countries over a global warming battle plan that fell well short of what science says is needed to tackle the climate crisis.

The gap between rich countries and poor countries widened further with nothing decided on Loss and Damage (compensation for vulnerable countries hit by climate change). No money and no agreement on Article 6, which was to set up international carbon markets, could be reached.

Kashmala Kakakhel, a climate finance expert serving on Pakistan’s official delegation to COP25 who stayed up for the last two nights, said there was lots of disappointment as the summit concluded today. The theme for this year’s UN climate conference was “Time for Action” with a clock ticking close to midnight, but by Sunday morning it was clear not much was going to be salvaged.

“This COP aimed to settle some of the critical aspects for full and effective implementation of the Paris Agreement in 2020. However, developed countries demonstrated unwillingness to progress on issues critical for countries like Pakistan to undertake ambitious climate actions. In some ways, the spirit of Paris Agreement has been lost in translation,” Kakakhel said.

The United States, in particular, continued to water down all attempts of setting a strategic global financial target according to which developing countries could plan projects and initiatives. “The worst part was the lack of understanding of how to go about developing a robust market mechanism for carbon credits, a version of which has already been unsuccessful in achieving climate objectives,” she maintained.

Harjeet Singh, Action Aid’s global lead on climate change, said: “The US has once again gotten its way through bullying and tricks… as fires rage and cyclones intensify, rich countries have folded their arms, refusing to offer the new systems and money so urgently needed to help countries forced to pick up the pieces after disasters”.

“This decision only offers statements of intent, working groups and networks, which should have been in place years ago. This result fails to offer a helping hand to climate survivors in the Global South who did the least to cause the crisis,” he added.

The COP25 deal “expresses the urgent need” for new carbon cutting commitments to close the gap between current emissions and the Paris treaty goal of capping temperature at below two degrees, host country Spain said in a statement.

“Today  the citizens of the  world are asking for us to move ahead faster and better, in financing, adaptation, mitigation,” Carolina Schmidt, Chilean environment minister and President of COP25, told the closing plenary.

Following a year of deadly extreme weather and weekly strikes by millions of young people demanding action, negotiations in Madrid were under pressure to send a clear signal that governments were willing to double down.

The summit — moved at the last minute from Chile due to unrest — at times teetered on the brink of collapse as rich polluters, emerging powerhouses and climate-vulnerable nations groped for common ground in the face of competing national interests.

“Based on the adopted text, there is a glimmer of hope that the heart of the Paris Agreement is still beating,” said Mohamed Adow, Director of Power Shift, referring the treaty inked in the French capital.

“But its pulse is very weak.”

Negotiators from nearly 200 nations came to Spain’s capital with the aim of finalising the rulebook for the 2015 agreement, which enjoins nations to limit global temperature to below two degrees Celsius (3.6 Fahrenheit).

Give mountain communities funds to adapt

Malik Amin Aslam, the Advisor to the PM on Climate Change who headed the Pakistani delegation at the summit, said: “From the start COP25 was designed as a working meeting leading up to the Paris Agreement initiation in Glasgow next year. With the US confirmation of their pull-out, the deliberate burning of the Amazon forests and the last minute shift to Madrid, it started with lost momentum and deflated expectations. However in the end it even failed to meet those”.

Pakistan, nevertheless, tried its best to play its part by constructive engagement with the process, highlighting concrete climate actions on the ground, launching innovative financing ideas like the Ecosystem Restoration Fund (ESRF) and collaborating with collective voices on adaptation, said Aslam.

Pakistan announced at the COP25 that it would join the mangrove led Blue Carbon alliance and the eight-country high-mountain impact group for the Hindu Kush Himalayan region.

The PM’s aide said that Pakistan has been recognised for its proactive contribution through a seat on the COP bureau as vice-president and the membership of five other important committees, including the ones on climate finance, adaptation and loss and damage.

In the end, the only good outcome of the talks was the youth-led protests around the world inspired by teenaged activist Greta Thurnberg, who led to them knocking on the doors of the COP negotiations.

“The youth finally managed to gate-crash their way into the high table this year and got an energetic voice at the plenary. This to me was the silver lining of the COP and gives me hope for the future,” said Malik Amin Aslam.