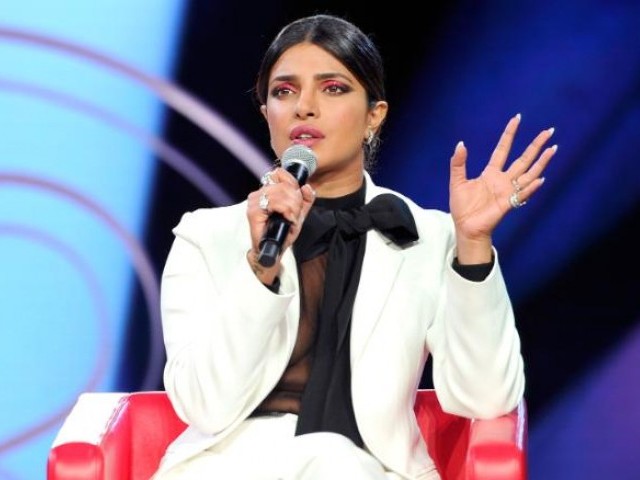 Bollywood actor Priyanka Chopra has come out to defend her infamous “Jai Hind! #IndianArmedForces” tweet that was shared during escalated nuclear tensions between India and Pakistan.

The Sky is Pink star was subsequently called out for being a warmonger on social media and that her UNICEF Goodwill Ambassador should be revoked.

In her latest interview with Daily Beast, Chopra addressed landing in hot waters for her controversial tweet and comments that followed at a conference in Los Angeles.

Open letter to Unicef about their continued association with warmonger #PriyankaChopra. Please retweet to Unicef until they respond. #KashmirBleeds #kashmir #standwithkashmir #lovekashmir pic.twitter.com/clGPIMHIpg

“I feel like this is not an opportune moment to talk about it. Second of all, it was unfortunate what happened, and third of all, I never have, never was, and never will be pro-war and that is in my statements itself. My work for all of these years is a testament to that, and I don’t feel I need to keep regurgitating it,” Chopra said.

The star was also heavily criticised on social media after patronising Pakistani woman Ayesha Malik during a Beauty Con appearance in August. After Ayesha grabbed the microphone to ask the star why she was discussing humanity after ‘encouraging nuclear war against Pakistan.’

“Whenever you’re don’t venting”. Sorry, didn’t realize that speaking on a humanitarian crisis was “venting” pic.twitter.com/OqCLgjDNa1

Chopra then replied, “Whenever you’re done ranting? Got it? Okay, cool.” The actor went on, “I have many friends from Pakistan and I am from India, war is not something I am fond of but I am so patriotic…”

During the recent interview with Daily Beast, Chopra touched upon what the power of influence means to her. “I feel that influence is an extremely important power, and it has a lot of responsibility that comes with it,” she said.

Can you be a “patriot” and be a UN Ambassador. I say NO. #PriyankaChopra pic.twitter.com/YIcIyG7crF

“It doesn’t have the responsibility that heads of states might have, because obviously we are not lawmakers or we cannot change those things, but we can influence, and I have always hoped to be able to use my influence in terms of philanthropy, and creativity in the arts, and to be able to, if I have opinions as a citizen, be able to speak about my opinions, and be able to give people perspective that they might not have seen because of my travels.”

Tips on how to treat postpartum hair loss