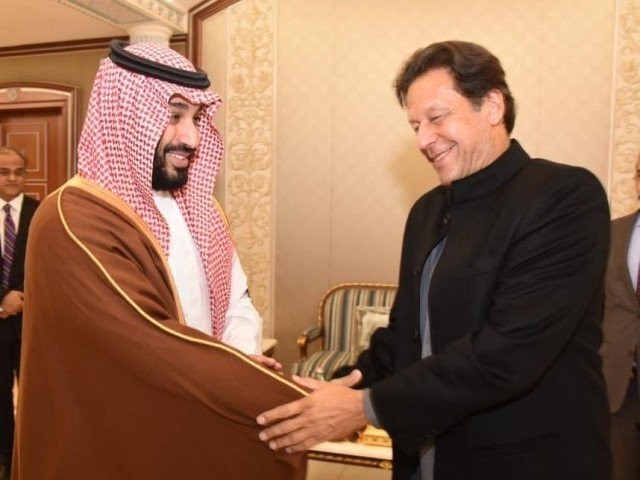 RIYADH: Prime Minister Imran Khan has said that Pakistan would continue to facilitate efforts to resolve all disputes in the Middle East through diplomatic means to preclude conflict. The reiteration of Pakistan’s viewpoint by the prime minister came in his meeting with Saudi Crown Prince Mohammed Bin Salman in Riyadh on Saturday.

Premier Imran, who was on a daylong visit to the oil-rich kingdom, held wide-ranging consultations with the Saudi prince covering bilateral matters and developments in the regional context, according to a statement issued by the foreign ministry in Islamabad.

The prime minister’s visit – which is part of regular exchanges between the leaderships of the two countries – came on the heels of a whirlwind trip by Foreign Minister Shah Mehmood Qureshi who, accompanied by Pakistan’s spy chief, toured Riyadh four days back to lay the groundwork for Imran’s trip.

This was the prime minister’s fourth visit to Saudi Arabia since May 2019, which reflects the importance attached by Pakistan to this strategic partnership, according to the statement. Imran emphasised the strategic importance of Pakistan-Saudi Arabia relationship and termed it a “pivotal partnership for peace, progress, and prosperity”.

In the bilateral context, the prime minister underscored the unique strength of Pakistan-Saudi Arabia relations, based on mutual trust and understanding.

He noted that high-level visits were the hallmark of the relationship and the crown prince’s visit to Pakistan in Feb 2019 had ushered in a new era of deeper engagement across the economic, investment, energy, security and defence, and people-to-people domains.

The two leaders expressed satisfaction at the ongoing bilateral cooperation between the two countries. They reiterated their determination to take bilateral relations to a new level.

It was noted that the establishment of the Saudi-Pakistan Supreme Coordination Council had provided a firm institutional mechanism to advance cooperation in diverse fields in a robust manner. The two sides hoped to further advance this process during the second meeting of the council expected to take place early next year.

“In the context of the Middle East, the prime minister reiterated Pakistan’s perspective that disputes and differences be resolved through political and diplomatic means,” according to the statement. “Pakistan would continue to facilitate all efforts in that direction with a view to precluding conflict, defusing tensions and preserving peace for the benefit of the region and the world,” it added.

The prime minister apprised the Saudi crown prince of the latest situation in Indian Occupied Jammu & Kashmir, marked by continuous lockdown and other restrictions since August 5, 2019. This was accompanied by India’s belligerent rhetoric and actions on the Line of Control.

Imran thanked Riyadh for its traditional support to the Kashmir cause, including its active role in the OIC Contact Group on Jammu & Kashmir. The two sides discussed ways of further advancing the Kashmir cause through the OIC and other means.

The Saudi side offered all possible support in the development of the tourism sector in Pakistan. In this context, it was agreed that the Saudi team would undertake a visit to Pakistan soon.

Premier Imran reached Riyadh after a brief stopover in Madian, where he paid his respects at Roza-e-Rasool (Peace be Upon Him) and offered prayers there.

On his arrival in the Saudi capital, he was received by Governor of Riyadh Province Prince Faisal bin Bandar bin Abdulaziz and Ambassador of Pakistan Raja Ali Ijaz at the Royal Terminal. Foreign Secretary Sohail Mahmood also accompanied the PM.

Talking to a private TV channel, Foreign Minister Qureshi said on Saturday there were no misunderstandings between Islamabad and Riyadh, rather the government has removed the ones created by its predecessors.

The minister referred to Pakistan’s role in lowering tensions in the Middle East, particularly between Saudi Arabia, Iran and Qatar. Being a founding member of the Organisation of the Islamic Cooperation (OIC), Pakistan would play its role to remove the strain in ties among Muslim states, he added.