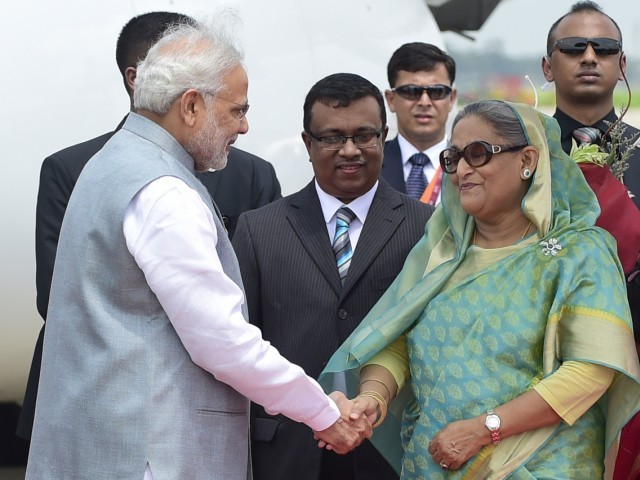 DHAKA: A new legislation approved by the Indian parliament granting citizenship rights to minorities from neighbouring countries has created a diplomatic row between India and Bangladesh.

Not only two Bangladeshi ministers cancelled their scheduled visit to India, minority communities in Bangladesh such as Hindus and Buddhists have also rejected the Indian legislation and reference made in the Indian parliament about their persecution.

Referring to harassment of minorities in Pakistan, Bangladesh, and Afghanistan, India amended its citizenship law by giving citizenship rights to Hindus, Buddhists, Christians, Parsis and Jains migrating from these countries.

Speaking in the parliament, Indian Home Minister Amit Shah stated that the persecution of Hindus has not stopped in Bangladesh, Pakistan and Afghanistan, which has called for bringing the Citizenship Amendment Bill.

Home Minister Assaduzzaman Khan Kamal said that while adopting or amending legislation was India’s internal matter, allegations about the torturing of minorities in our country were “totally baseless and false”.

He described speeches made in the Indian parliament regarding the oppression of minorities in Bangladesh as “nonsense”. He claimed that there was no report of any communal tension in Bangladesh over the past 11 years.

“Just look at [Muslim religious festivals] Eidul Fitr, Eidul Azha and [Hindu] Sharodio Durga puja and Christmas Day [in Bangladesh], you see spontaneous participation of all people regardless of ethnic and communal identity,” he added.

He said Bangladesh had a history of living with amity and communal harmony. “Any isolated incident from any part of the country cannot be construed as overall harassment,” he said.

Praising religious harmony under the leadership of Prime Minister Sheikh Hasina, leader of the Buddhist community Dilip Barua said his community does not face any persecution, as alleged by various Indian lawmakers, while defending the controversial legislation.

“This allegation of India amounted to challenging the spirit of Bangladesh’s liberation war,” he said.

He accused India’s ruling Bharatiya Janata Party (BJP) of conspiring to turn their country into a Hindu nationalist state. He said due to Indian actions, communal harmony in Bangladesh may also come under stress.

“But through the spirit of real democracy, we will overcome this challenge,” Barua added.

“In our country, there is no record of communal tension under state patronization. People are peacefully living here for many generations,” he added.

He said in the northeastern state of Assam, an exercise to detect illegal immigrants have kept 1.9 million people out of the citizenship list.

“Irony is that relatives of even India’s former President Fakhruddin Ali Ahmed have been kept out of the citizenship list,” he said.

Terming the religious harmony in Bangladesh far better than in India, Shafiqur Rahman, head of the country’s largest Islamic political party Bangladesh Jamaat-e-Islami, said his country does not discriminate between majority or minority.

“We believe that all are the citizens of Bangladesh and deserve equal human rights,” he said.

He termed the Indian amendment to the citizenship law as “totally discriminatory”.