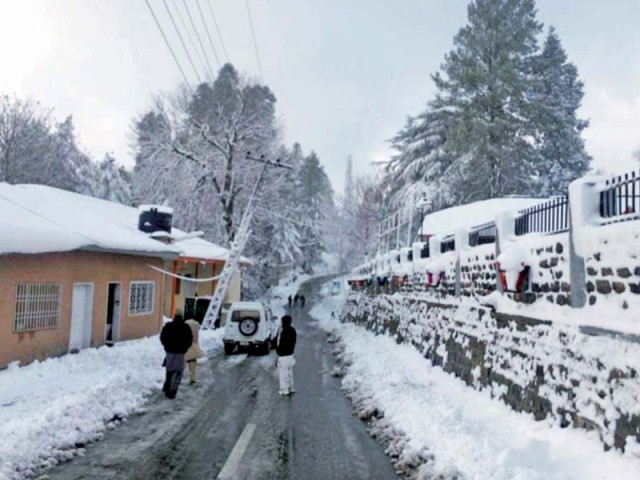 Snow covers trees, and houses on a street in the Nathiagali hill station on Friday. PHOTO: PPI

ABBOTTABAD: Due to heavy snowfall followed by rains in the hilly areas of Abbottabad including Nthiagali, Ayubia, Thandyiani and other areas, the mercury has dropped to below the freezing point. The met department, however, has forecasted additional snow and rainfall in the upper areas of Abbottabad over the weekend.

Around two feet of snow was recorded in the Galyats and at Thandyiani where traffic from Kala Pani onwards remains closed for all sorts of traffic. The communication and works department is working to clear the Abbottabad-Thandyiani road.

Galiyat Development Authority (GDA) Spokesperson Ahsan Hameed confirmed the first snowfall of the winter season. However, he added that the road linking Galiyat and Abbottabad to Muree were clear for all sorts of traffic.

However, he added that there was some land sliding in Changlagali, for which they had deployed machinery to clear it for the smooth flow of traffic.

The snowfall, Hameed said, had attracted a large number of tourists who had travelled to Nathiagali, Dongagali, Ayubia and Changlagali. The arrival of tourists, he said, had also been helped by the efforts of the GDA to clear roads.

The GDA representative told the media that they are working on promoting “Winter Tourism” in the area and GDA staff, including Director General Raza Ali Habib and maintenance staff, is on alert while facilitation centres have been set up at different points in collaboration with the Galiyat and Abbottabad police.