Zardari arrives in Karachi for medical treatment after IHC bail

Zardari arrives in Karachi for medical treatment after IHC bail 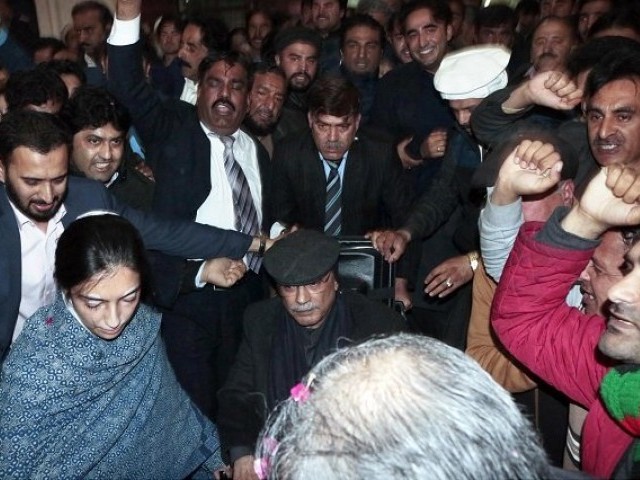 The Pakistan Peoples Party (PPP) co-chairman, who flew to the provincial capital from Rawalpindi in a special  aircraft of Sindh Chief Minister Murad Ali Shah, was accompanied by his daughter Aseefa Bhutto-Zardari.

Special team of doctors was also with the PPP stalwart during the flight.

PPP Chairman Bilawal Bhutto-Zardari along with other party leaders and dozens of party workers welcomed the former president at the airport.

He was shifted to Zardari House in Karachi where he also held meeting with his sister Faryal Talpur.

The former president would be treated at Ziauddin Hospital in Clifton where a VIP room has been prepared for his medical check-up.

Initially, his CT scan and angiography would be conducted whereas angioplasty will also be done if necessary. Head of National Institute of Cardiovascular Diseases (NICVD) Dr Nadeem Qamar would be Zardari’s consultant cardiologist.

The PPP leader has been suffering from ischemic heart disease, which means his heart may have an inadequate supply of blood and oxygen. He also has severe pain in L5-S1 vertebra of the spinal cord.

Zardari had been undergoing treatment in Islamabad at the Pakistan Institute of Medical Sciences (Pims)  cardiac centre’s private ward, which was declared a sub-jail since October 21 after a six-member medical board concluded that he needed medical care for multiple ailments including heart conditions and diabetes.

An accountability court in the federal capital on Thursday issued two separate robkar (court letter/certificate declaring cancellation of non-bailable warrants) for the release of the PPP leader after submission of surety bonds.

He was granted bail by the IHC on Wednesday, more than five months after he had been taken into custody by the National Accountability Bureau (NAB) over charges of financial corruption and money laundering.

The 64-year-old politician had been in the custody of NAB since his arrest on June 10 following the cancellation of his pre-arrest bail by the IHC.