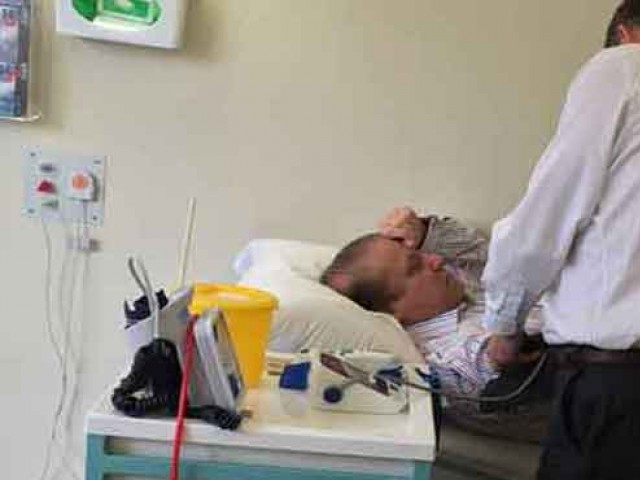 ISLAMABAD / LAHORE: Doctors in the United Kingdom (UK) have confirmed that former prime minister Nawaz Sharif is suffering from multiple and aggravated ailments and might require toxicology screening if cause of his unstable platelet count is not ascertained soon.

According to a medical report, issued by Dr Lawrence, the Pakistan Muslim League-Nawaz (PML-N) supremo “suffers from various significant ailments and comorbidities”.

The report was submitted before the deputy registrar of Lahore High Court (LHC) by Nawaz’s counsels on Friday.

Nawaz has most likely ITP, immune thrombocytopenia – a disorder that can lead to easy or excessive bruising and bleeding, wrote the cardiothoracic surgeon. “The trigger and underlying cause for which is unclear, but he is having a slow response to first and second line therapies,” he added.

“If the platelet count does not respond, he may be considered for possible toxicology screen. We want to target a platelet count between 50-150 to allow safe treatment with anti-platelet therapy.”

Nawaz, who was scheduled to leave for the United States over the weekend for further specialist treatment, is now likely to travel on Monday or Tuesday, sources told The Express Tribune.

The Pakistan Muslim League-Nawaz (PML-N) supremo had left for London on November 19 in an air ambulance to seek medical treatment, a month after he was released on bail from a seven-year prison sentence for corruption.

Nawaz to leave for medical treatment in US

He was in the custody of National Accountability Bureau (NAB), when a sharp and radical drop in his platelet count from over 75,000 to just about 2,000 within 24 hours worried doctors.

The 69-year-old three-time former prime minister was shifted to Lahore’s Services hospital in October after his health condition deteriorated . Doctors then recommended him to get treatment abroad.

The government had allowed Nawaz’s travel for medical reasons but put the condition that he submit an indemnity bond of Rs7-7.5 billion as a guarantee that he would return to the country after getting treatment. Nawaz, however, rejected the condition.

Nawaz had been granted bail by the Islamabad High Court on humanitarian grounds in the Al Azizia case and by the Lahore High Court in the ongoing Chaudhry Sugar Mills case, in which he is a suspect.

In November, he was allowed by the LHC to travel abroad for treatment without any bond.

In his report, Dr Lawrence said there has also been a “recent exacerbation of coronary artery disease” and “there is ongoing persistent lymphadenopathy and bilateral carotid artery stenosis”.

“A PET scan was arranged at London Bridge Hospital under Hematology at London Bridge, he has to be investigated for his lymphadenopathy; a lymph node biopsy has been recommended to him after the scan.

“He initially did very well following his coronary artery bypass surgery but has had a troublesome circumflex vessel which has occluded on at least two occasions. The resultant effect has been persistent ischaemia in the lateral wall of his heart and NSTEMI.”

The report added that Dr Chris Baker then performed an angioplasty to this on October 9, 2017 but his symptoms are now recurrent.

“Cardiac MRI is booked via Chris Baker’s office. The team at the London Bridge has also arranged that he see Professor Simon Redwood who I understand is going to repeat his coronary angiogram as a query proceed. Mr Sharif is also due for a vascular referral to address the critical carotid artery stenosis (>80% Rt ICA, October 2019) which is a risk for stroke.

“He has to proceed with cardiac and carotid issues once he stabilises and gets clearance from the haematology team treating him. I will look to review him with the results of his cardiac scans/cath and clinical hematology consults,” Dr Lawrence further wrote.

He recommended the patient to find time for “short walks at least twice daily”.

“Mr Sharif is currently undergoing investigations and is under constant clinical monitoring of the ongoing treatment which is paramount to stabilise his health, also requiring persistent follow up in the United Kingdom until these issues are finally addressed and he is able to resume day to day activity.”