PM Imran likely to fly to Riyadh in days

PM Imran likely to fly to Riyadh in days 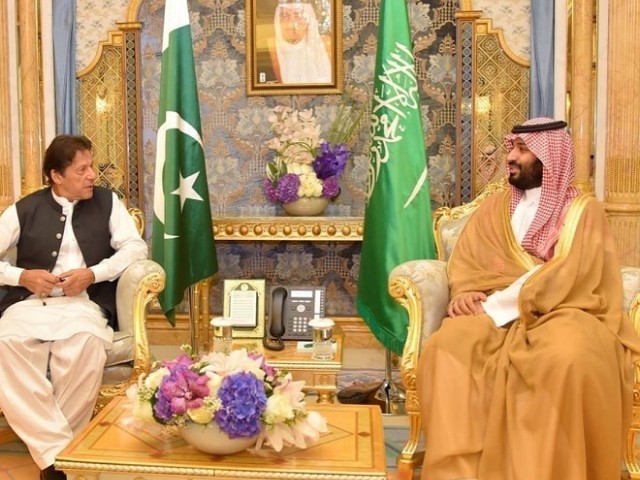 ISLAMABAD: Prime Minister Imran Khan is expected to travel to Saudi Arabia soon as part of Pakistan’s continued efforts to facilitate rapprochement between Riyadh and Tehran.

Foreign Minister Shah Mehmood Qureshi, also accompanied by the head of Inter-Services Intelligence (ISI), visited Riyadh on Wednesday and believed to have laid the ground for the premier’s visit.

Diplomatic sources said the flurry of visits by Pakistani civil and military leadership to Saudi Arabia and Iran over the past few weeks suggested that there might be ‘some breakthrough’ in the diplomatic manoeuvres initiated by Islamabad.

This would be Prime Minister Imran’s fourth visit to Saudi Arabia since May. In October, he also travelled to Iran following his meeting with Saudi Crown Prince Mohammed bin Salman in Riyadh and Iranian President Hassan Rouhani in New York in September.

The army chief, General Qamar Javed Bajwa, and the ISI Director General Lt-Gen Faiz Hameed also visited Iran. General Qamar’s visit to Tehran in November was considered significant as he, according to some diplomatic sources, was carrying important message for the Iranian leadership on behalf of Saudis.

Pakistan has been trying to seek a patch-up between Iran and Saudi Arabia since September when the Saudi oil facilities came under missile attacks.

At that time there was a real danger of tensions translating into some serious conflict in the Persian Gulf region, as both the US and Saudi Arabia blamed Iran for the attack. Tehran had denied the charge while the Houthi rebels in Yemen came up and claimed responsibility.

Sensing the negative fallout of direct conflict between the two key Muslim countries, Pakistan made hectic efforts to prevent any escalation. Prime Minister Imran Khan during his visit to UN General Assembly session in New York confirmed that he was mediating between Iran and Saudi Arabia.

But later Pakistan clarified that it was only facilitating the dialogue between Riyadh and Tehran. Pakistan enjoys close relationship with Saudi Arabia but at the same time considers its ties with Iran important because of its proximity and other reasons.

Officials here said Islamabad is trying to seek rapprochement because it cannot afford taking sides in the conflict between Iran and Saudi Arabia.

“It is in our interest that there should be de-escalation in tensions between Iran and Saudi Arabia,” a senior government official said while explaining why Pakistan was making extra efforts to facilitate dialogue between the two countries.

Speaking at the weekly news briefing, Foreign office spokesperson Dr Muhammad Faisal on Thursday said high-level exchanges between Pakistan and Saudi Arabia are the ‘hallmark of the brotherly relationship.’

“You have witnessed the high frequency of leadership level exchanges, especially since last August. The prime minister has undertaken at least 3 visits to KSA since May this year,” he added.

However, he did not say when the prime minister would travel to Saudi Arabia. “Any further information about any future visit will be shared accordingly,” Faisal added. Sources, nevertheless, say the visit is expected on December 14 or 15.

Pakistan at bottom of the barrel in human development