This has made the creato­r of Thanos, Jim Starli­n, very angry!
By Entertainment Desk
Published: December 12, 2019
Tweet Email 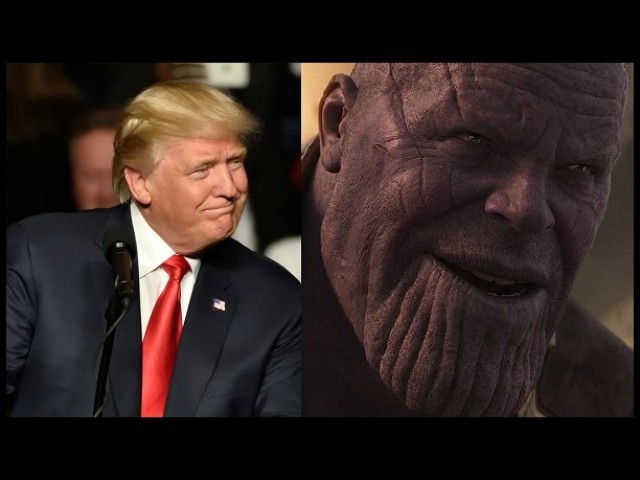 A new advert from US President Donald Trump’s re-election ad campaign has surfaced on social media and users are having a ball of a time. However, Thanos creators don’t seem to be too happy about it, given that Trump is featured as none other than Thanos himself in the video.

It seems to be a grim day for Marvel, as the creator of the Avengers supervillain Thanos, Jim Starlin, has condemned the advert released calling it ‘sick’.

“How sick is that? he questioned The Hollywood Reporter , “these are sad and strange times we are going through. Fortunately, all things, even national nightmares, eventually come to an end.”

House Democrats can push their sham impeachment all they want.

A video posted on the official Trump War Room Twitter account shows Trump’s face superimposed onto Thanos’ body in a scene from Avengers: Endgame in which the villain says “I am inevitable”, before snapping his fingers in an attempt to destroy all life in the universe.

The clip goes onto show how the House Speaker Nancy Pelosi and other Democratic leaders actually vanish into dust, meeting the same fate as many of Thanos’ victims.

“House Democrats can push their sham impeachment all they want. President Trump’s re-election is inevitable,” reads the tweet’s caption.

The comic-book writer and artist who created Thanos in 1973, Starlin, condemned the video, saying, “After my initial feeling of being violated, seeing that pompous fool using my creation to stroke his infantile ego, it finally struck me that the leader of my country and the free world actually enjoys comparing himself to a mass murderer.”

The Trump video comes in the wake of the House Democrats introducing two articles of impeachment against the president.

Aside from Starlin, suprlus Twitter users are also questioning as to whether Trump’s ad campaign is in good humour, or a startling revelation. However, some are calling it his ‘Endgame’, given Thanos loses at the end anyway.

So… we're at the endgame, the final point where Thanos/Trump loses for good?

“So, we’re at the endgame, the final point where Thanos/Trump loses for good?” said one user.

So how long till Marvel send them a letter about copyright infringement? I can't see Marvel backing the bad guy.

“So how long till Marvel sends them a letter about copyright infringement? I can’t see Marvel backing the bad guy.” Added another user.