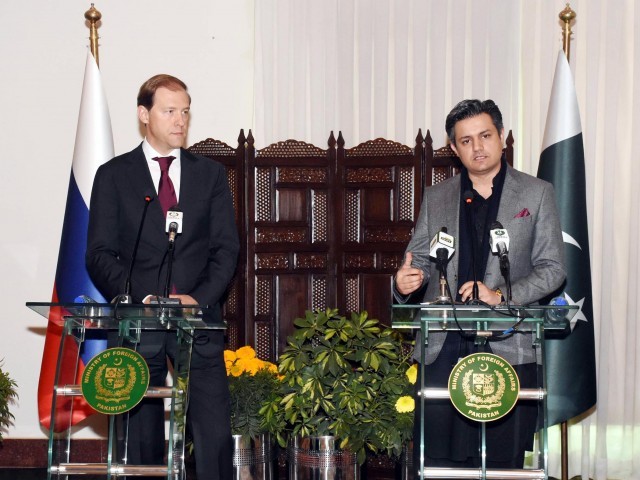 ISLAMABAD: Pakistan and Russia have agreed to a joint venture to enhance the cooperation for the upgradation and modernisation of Pakistan railways infrastructure, as the two sides resolve to increase volume of bilateral trade through enhanced business activities by their private sectors.

During a plenary session of the 6th Pak-Russia Inter-Governmental Commission on Trade, Economic, Scientific and Technical Cooperation here, Moscow evinces keen interest in the pharmaceutical and energy sectors of Pakistan.

“We are negotiating for Russian investment in local market and the government has invited them to bring investment in mines sector,” Economic Affairs Minister Hammad Azhar, who led the Pakistan delegation at the plenary session, told a media briefing after the meeting.

“I believe that Russia has expertise in this [railways] sector and we will expand the cooperation for introducing the modern locomotive in local trains to resolve the issues of design and speed of trains,” Azhar said.

The head of the Russian delegation, Manutov said that Pakistan and the Russian Federation were committed to enhance bilateral trade and further cooperation in aviation, professional training and capacity building of the local industrial sector.

Manutov, the industry and trade minister of the Russian Federation, told the reporters that Russian investment groups were keenly interested to invest pharmaceutical sector, medical machinery and aviation.

Earlier, at plenary session, both sides agreed to strengthen bilateral ties in all areas of mutual interest, including political, trade, economic, energy, education and people-to-people contacts, said a statement.

Azhar briefed the forum about the recent economic developments and highlighted the improved indicators of Pakistan’s economy. He also apprised the Russian side of the successful implementation of International Monetary Fund (IMF) Programme.

The participants exchanged views on the prospects of the economic cooperation in multiple sectors, especially energy, trade, transport, industries and production, railways, agriculture and technology. Discussions were held on removing the temporary ban on Pakistan’s agriculture exports.

They also discussed the prospects of Russian investment for revival of the Pakistan Steel Mills. The Russian side expressed keen interest in the energy sector of Pakistan particularly the North-South Gas Pipeline.

Both sides resolved to increase volume of bilateral trade from the present levels to its true potential through greater cooperation and enhanced business activities by the private sector of the two countries.

The Russian side invited Pakistan to organise a roadshow in Moscow to provide an opportunity to the Russian private companies to explore new avenues in Pakistan. The Pakistani side, on the other hand, invited Russia for their presence in trade expos held in Pakistan.

The Pakistan-Russia Inter-Government Commissions (IGC) on Trade, Economic, Scientific and Technical Cooperation meets alternately in the capitals of both the countries. The 7th session of IGC will be held in Moscow on mutually agreed dates

Later in the day, Manturov called on Prime Minister Imran Khan and briefed him on a range of subjects, which were discussed during the 6th session of the IGC. He also conveyed special greetings from Russian President Vladimir Putin to the prime minister.

He underlined Pakistan’s commitment to commence a new phase in the relationship with the Russian Federation. He recalled his extensive interaction with President Putin on the sidelines of the Shanghai Cooperation Organisation (SCO) summit in Bishkek in June 2019.

The prime minister highlighted the improved macroeconomic stability and business climate and ease of doing business in Pakistan and noted that there were vast opportunities that the Russian companies could utilise for enhanced trade and investment.

During the meeting, the importance of leadership exchanges was emphasised. The prime minister stated that he looked forward to his visit to Russia during 2020. He also expressed the hope that President Putin would visit Pakistan at his earliest convenience.