Ajax crash out of the Champions League after defeat by Valencia

Ajax crash out of the Champions League after defeat by Valencia

Dutch side were arguab­ly the story of the compet­ition last season when their youthf­ul team reache­d the semi-finals­
By AFP
Published: December 11, 2019
Tweet Email 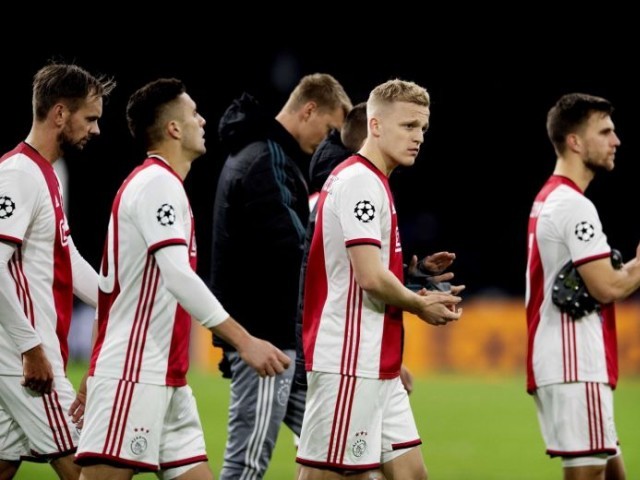 Dutch side were arguably the story of the competition last season when their youthful team reached the semi-finals. PHOTO: AFP

AMSTERDAM: Ajax’s hopes of another fairytale run in the Champions League were dashed on Tuesday as a 1-0 defeat at home to Valencia sent them crashing out and the Spaniards through to the last 16.

Rodrigo Moreno’s 24th-minute strike proved the winner at the Johan Cruyff Arena and enough to flip the top three in Group H, with Valencia advancing in first place along with Chelsea, who beat bottom club Lille 2-1.

Ajax were arguably the story of the competition last season when their youthful team went all the way to the semi-finals but there will be no repeat this year.

Gabriel Paulista was sent off in injury-time but even against 10 men, they could not find the equaliser they needed.

Instead, Valencia not only progress but have earned themselves the best chance of a kind draw when the knock-out stage is decided in Nyon on December 16.

It seemed unlikely after they missed a series of golden opportunities to beat Chelsea earlier this month but a 2-2 draw still left them with a chance, even if the odds were not in their favour.

Chelsea edge past Lille and into Champions League last 16

They knew they either had to beat Ajax, against whom they had lost 3-0 at home in October, or at least match the result of Chelsea, who always seemed likely to win against Lille at Stamford Bridge.

Ajax, meanwhile, began the night two points clear at the top of the group and needed only a draw to go through.

Valencia coach Albert Celades, who made his La Liga debut as a player under Cruyff, was now in the dugout of the stadium named after the iconic Dutchman and this will be a major boost for his side, who are eighth in La Liga after a rocky start to the season on and off the pitch.

Ajax sit three points clear at the top of the Eredivisie but last year’s heroics in the Champions League, and their heartbreaking defeat to Tottenham, meant they had European ambitions too.

Rodrigo headed wide from a corner early on but after a frantic start, the game settled, with Ajax dominating possession and Valencia trying to counter-attack.

Against the run of play, Valencia took the lead as Rodrigo’s bending run in behind was picked out by a Ferran Torres pass. Rodrigo controlled with his left and fired the ball with his right into the roof of the net.

Ajax had to wait until the end of the half for their best chance as Donny van de Beek latched onto Hakim Ziyech’s pass and lifted the ball over Jaume Domenech, only for Jose Gaya to make a brilliant clearance off the line.

Rodrigo might have made it two at the other end but it was Ajax that were pushing for an equaliser after the restart as Valencia retreated.

Ziyech should have levelled but fluffed his finish at the near post before 20-year-old Noa Lang hooked over from inside the box.

Lille pulled a goal back away at Chelsea to give Ajax further hope and they were almost gifted an equaliser by Valencia’s Daniel Wass, who chesting the ball away from his own goalkeeper.

Ziyech went close with a shot towards the near post and, three minutes into injury-time, Gabriel was sent off for thrusting his head into Dusan Tadic.

It left Valencia to defend two minutes, and a corner, with 10 men but Ajax could not find a way through.