K-P yet to set up regional seminary registration offices

K-P yet to set up regional seminary registration offices

Wafaqu­l Madari­s chief says the matter has been pendin­g for the past nine months­
By Wisal Yousafzai
Published: December 11, 2019
Tweet Email 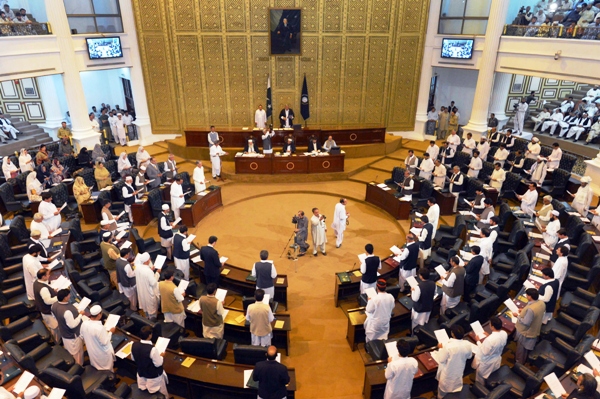 PESHAWAR: Despite requirements under the National Action Plan (NAP) and public announcement by the government on multiple forums, the provincial government has yet to set up regional offices to register religious seminaries in the province.

Such has been the lethargy of the Khyber-Pakhtunkhwa (K-P) government on the subject that they have yet to even legislate on the issue.

“Around 6,000 religious schools across K-P are operating under Wafaqul Madaris — the central body regulating seminaries of different religious schools of thought — but the provincial government has yet to legislate for their registration and regulation,” said Wafaqul Madaris Chief Maulana Hussain Ahmad during the ”Food Festival and Sports for Peace” festival at Jamia Usmania in Peshawar on Tuesday.

The festival saw students from different religious seminaries compete against each other. It had been organised by UNESCO.

While interacting with The Express Tribune, Maulana Ahmad stated that after consulting with and taking the consent of notables and religious scholars, the government had decided to open regional registration offices to register madrasas.

But nine months on, no action in this regard has been taken by the government.

He added that due to the stalled registration of the seminaries, it has created a problem for some of the foreign students at some of these educational institutions in securing or extending their visas.

“Every government which comes into power promises to register religious seminaries and this government repeated much of the same promises, but it has yet to fulfil them,” the Wafaqul Madaris chief stated.

The event aimed at highlighting intangible cultural heritage and values of the province through drama performances and local poetry recitals.

Different areas of the province were also represented in the festival through their traditional food and culture.

Students from Jamia Usmania and the government high schools of Kafoor Dheri and Safaid Sang actively participated in the festival.

The event highlighted the diversity, interfaith harmony and tolerance.

She said that intangible cultural heritage and values serve the basis for resilience, reconciliation and construction of a peaceful environment. The poetry and drama session had captured the interest of the audience.

The guests and audiences expressed their excitement and need for having regular events for both madrasa and school students to bridge the communication gap and build a mutual way forward for a better and progressive country through education.

Students participating in the food and cultural festival are enrolled in courses such as peacebuilding through education. The students will serve as master trainers at various platforms and will be tasked with motivating and encouraging their peers, community members, religious leaders and family to mould their lives in light of tolerance and empathy for others.