Mahathir pledges to step down for Anwar, but not before November

Mahathir pledges to step down for Anwar, but not before November 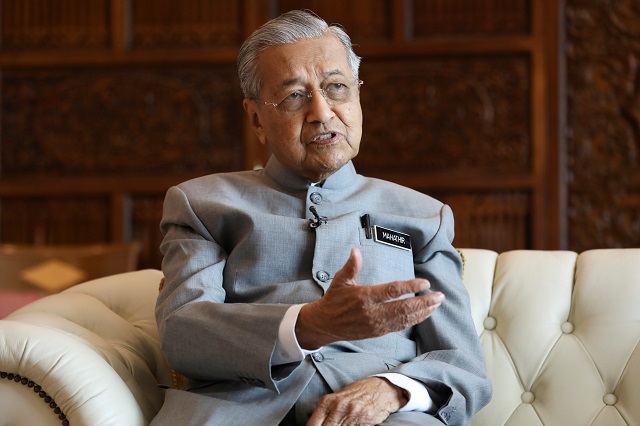 Mahathir, 94, told Reuters in an interview that he would not hand over before a summit of Asia-Pacific Economic Cooperation (APEC) countries that Malaysia is to host in November but could be ready after that.

“I made a promise to hand over and I will, accepting that I thought that a change immediately before the APEC summit would be disruptive,” Mahathir said.

“As far I’m concerned, I’m stepping down and I’m handing the baton to him. If people don’t want him, that is their business, but I will do my part of the promise… irrespective of whatever allegation. I made my promise, I keep my promise.”

Asked if a handover could come in December 2020, Mahathir said: “We’ll look at that when the time comes.”

The turbulent relationship between the two men – allies turned fierce rivals who later reunited to win power – has shaped politics in the Southeast Asian country for decades.

Mahathir was unexpectedly elected in 2018 as the head of a coalition government whose largest party is led by Anwar, 72, who has been jailed twice on separate counts of sodomy and for corruption – charges he says were political.

Last week, Anwar denied fresh allegations by a former aide that he had tried to force him to have sex – describing the accusations as “politics at its worst”.

It is Mahathir’s second stint as Malaysia’s premier, a post he previously held for 22 years from 1981 to 2003. Anwar was his deputy from 1993 to 1998, when the two fell out. Anwar was jailed the following year.

Although Mahathir promised to hand over to Anwar during the 2018 election campaign, doubts grew over his intentions when he later said he needed more time to steer the heavily-indebted country out of its troubles first.

Mahathir said he hoped for an out-of-court settlement with Goldman Sachs soon over the 1MDB scandal that sent Malaysia’s debt soaring.

He also raised the possibility of selling stakes in state energy firm Petronas to oil and gas-rich provinces.