It's a case of déjà vu when he also infamo­usly wrongl­y named Columb­ia as the 2015 winner of the beauty pagean­t
By Entertainment Desk
Published: December 9, 2019
Tweet Email 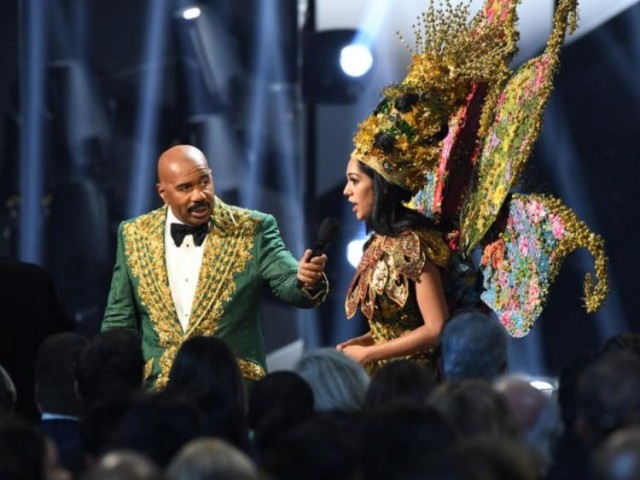 Miss Universe 2019 took place this weekend with Steve Harvey back to the hosting duties for the fifth time. Although, the host mixed up the names of two contestants, Miss Philippines and Miss Malaysia.

This brings back memories from Miss Universe 2015, when the beauty pageant host made his infamous blunder. He incorrectly named Miss Colombia Ariadna Gutiérrez as the winner instead of Miss Philippines Pia Wurtzbach.

This year, Harvey was at the task of introducing the winner of the national costume contest where Miss Philippines was involved but the contestant was actually Miss Malaysia, reported E! News.

What in the name of Coming to America is Steve Harvey wearing? #MissUniverse2019 pic.twitter.com/d8j59dI2Nv

The viral video showed a photo of Miss Philippines Gazini Ganados in costume and declared her as the winner. However, the contestant who walked on to the stage and stood beside him was Miss Malaysia Shweta Sekhon.

The real winner asked to take away the microphone so she could kindly correct him. “It’s not Philippines,” Sekhon told the host. “It’s Malaysia.”

Harvey then shared that he wasn’t totally at fault for announcing the wrong winner. Calling out the management and the teleprompter, a furious Harvey clarified, “Let me explain something to you. I just read that in the teleprompter. Ya’ll got to quit doing this to me. I can read. … Now, they are trying to fix it now. See? This is what they did to me back in 2015 – played me short like that.”

He continued, “This is Malaysia. I really love this National Costume of Malaysia. This is crazy.”

Sadly for Harvey, he began the night poking some fun at himself. The host reminded people of the Miss Universe 2015 gaffe and said, “I’m hosting again. Fifth time. Can you believe it? I can’t. Ya’ll never really did let go of that Miss Colombia thing. I survived it all. When you fall, get up. Colombia has gotten over that, too. They’ve forgiven me. Well, not all of them.  The cartel is still trippin’ a little bit.”

Additionally, Miss Malaysia was able to share the meaning behind her larger-than-life costume. “The state in Malaysia, which is the Melaka State, it’s historical heritage in my country. So what you see here is five tables with foods,” she shared. “And what I am wearing is the bride’s outfit from the mixed marriage between the Malays and the Chinese. And this is the tail of the goldfish…”

Harvey responded, “Whatever you said. I’m scared to say your name. Thank you, Malaysia. An outfit that nice, you ought to wear that again.”