North Korea has 'everything' to lose through hostile acts: Trump warns after missile test

North Korea has 'everything' to lose through hostile acts: Trump warns after missile test

'The result of the latest test will have an import­ant effect on changi­ng the "strate­gic positi­on" of North Korea'
By AFP
Published: December 8, 2019
Tweet Email 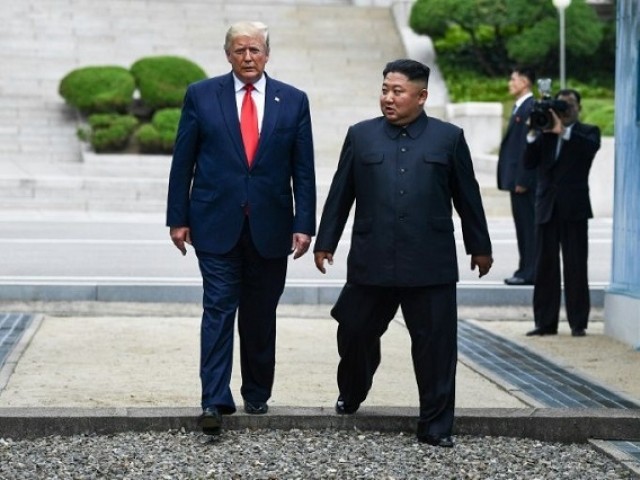 North Korea's leader Kim Jong Un and US President Donald Trump cross south of the Military Demarcation Line that divides North and South Korea, after Trump briefly stepped over to the northern side, on June 30, 2019. PHOTO: AFP

President Donald Trump warned on Sunday that North Korea had “everything” to lose through hostility towards the United States, after Pyongyang said it had carried out a major new weapons test.

“Kim Jong Un is too smart and has far too much to lose, everything actually, if he acts in a hostile way,” Trump tweeted in response to the unspecified test at the Sohae space launch centre.

….with the U.S. Presidential Election in November. North Korea, under the leadership of Kim Jong Un, has tremendous economic potential, but it must denuclearize as promised. NATO, China, Russia, Japan, and the entire world is unified on this issue!

Kim Jong Un is too smart and has far too much to lose, everything actually, if he acts in a hostile way. He signed a strong Denuclearization Agreement with me in Singapore. He does not want to void his special relationship with the President of the United States or interfere…. https://t.co/THfOjfB2uE

“He signed a strong Denuclearisation Agreement with me in Singapore,” Trump continued. “He does not want to void his special relationship with the President of the United States or interfere with the US Presidential Election in November.”

The statement comes hours after North Korea said it had carried out a “very important test” at its space launch centre, as Pyongyang ramps up pressure on Washington over stalled nuclear talks.

“A very important test took place at the Sohae Satellite Launching Ground on the afternoon of December 7, 2019,” a spokesperson for North Korea’s Academy of the National Defence Science said.

The result of the latest test will have an “important effect” on changing the “strategic position” of North Korea, the spokesperson said in a statement carried by the official KCNA news agency.

The statement did not provide further details on the test.
Sohae, on North Korea’s northwest coast, is ostensibly a facility designed for putting satellites into orbit.

But Pyongyang has carried out several rocket launches there that were condemned by the US and others as disguised long-range ballistic missile tests.

Satellite imagery taken on December 5 showed a large container box at the site that was “a decent indicator of an impending engine test”, Jeffrey Lewis of the US-based Middlebury Institute of International Studies had said ahead of Pyongyang’s statement.

Rocket engines are easily re-purposed for use in missiles and the international community has called Pyongyang’s space programme a fig leaf for weapons tests.

North Korea dismantled the test stand at Sohae amid a rapid rapprochement in 2018 but reassembled it this year, Lewis said, adding, “Still, we had not seen any activity at the test stand” until now.

“It is clear that this is one more sign that North Korea is conducting more missile-related activities as Kim Jong Un’s end-of-year deadline for sanctions relief approaches,” he said.

A senior US administration official said, “We have seen the reports of a test, and are coordinating closely with allies and partners”.
It comes as Pyongyang is ramping up pressure ahead of its December 31 deadline for the US to propose a new offer to kick-start stalled nuclear talks.

“Well, we’ll see about North Korea. I’d be surprised if North Korea acted hostiley,” he said on Saturday afternoon in Washington DC.
“(Kim) knows I have an election coming up. I don’t think he wants to interfere with that. But we’ll have to see.”

Following his first summit with Kim in June 2018, Trump said Kim had agreed to destroy “a major missile engine testing site” without naming the facility.

Kim then agreed to shutter the Sohae site during a summit last year with South Korean President Moon Jae-in in Pyongyang as part of trust-building measures.

Kim has held three meetings with Trump since June 2018 but little progress has been made in efforts towards denuclearisation.

On Thursday, the North’s vice foreign minister warned of returning to a war of words with the US, threatening to resume referring to Trump as a “dotard”, Pyongyang’s nickname for the US leader at the height of tensions in 2017.

The comments came a day after it warned that if the US used military force against the North it would take “prompt corresponding actions at any level”.

At the recent Nato summit, Trump boasted about Washington’s “most powerful military”, adding: “Hopefully, we don’t have to use it, but if we do, we’ll use it. If we have to, we’ll do it.”