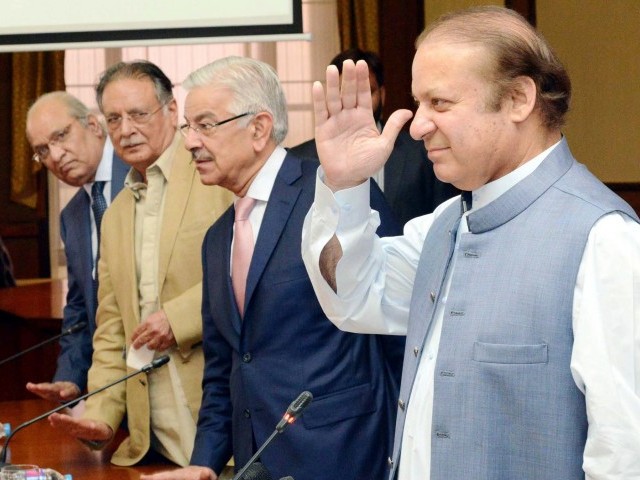 ISLAMABAD / LAHORE: The PML-N on Saturday stressed the need for an in-house change of the government before holding fresh elections as the party’s bigwigs met in London.

A group of PML-N leaders, who landed in London from Pakistan a couple of days ago, held a consultative session presided over by party President Shehbaz Sharif to weigh their options over the legislation for extending the army chief’s tenure and discuss the political situation in the country.

They also discussed the delay in the appointment of the chief election commissioner and two members of the Election Commission of Pakistan.

After the meeting, the PML-N leaders visited the party’s ailing supreme leader, former prime minister Nawaz Sharif, at the Avenfield apartments to inquire after his health.

Speaking to the media, Khawaja Asif said if fresh elections were to take place it was necessary to first have an in-house change – removing the prime minister through a no-confidence move instead of dissolving the assemblies.

Asif further said the PML-N leaders had informed the party president about the recent developments taking place both inside and outside the parliament and sought his guidance on these matters.

“We will chalk out the party’s policy on these issues when we return to Pakistan.”

To a query about the legislation on the extension of the army chief’s tenure, the PML-N leader said he could not comment about it until the court issued its detailed judgment on the matter.

On the PML-N leaders’ meeting with the Sharif family patriarch, Asif said the former prime minister’s personal physician had briefed them about his health.

Party leader Ahsan Iqbal told reporters after the meeting that the PTI government’s “blunders” in the matter of the army chief’s extension were an embarrassment for the entire nation.

He also maintained that the opposition had nothing to do with the talk of a minus-one agenda — replacing Prime Minister Imran Khan – and it originated within the PTI.

PML-N Punjab spokesperson Azma Bukhari told The Express Tribune that the party would start consultations with other parties from next week for an in-house change.

“The party’s prime goal is that fresh elections are held at the earliest and an in-house change is the only way to achieve it,” she added.

Shehbaz had recently backed the idea of an in-house change, saying that it was a constitutional and legal way forward.

He said PM Imran had become a burden and the nation needed to be rid of him as soon as possible.