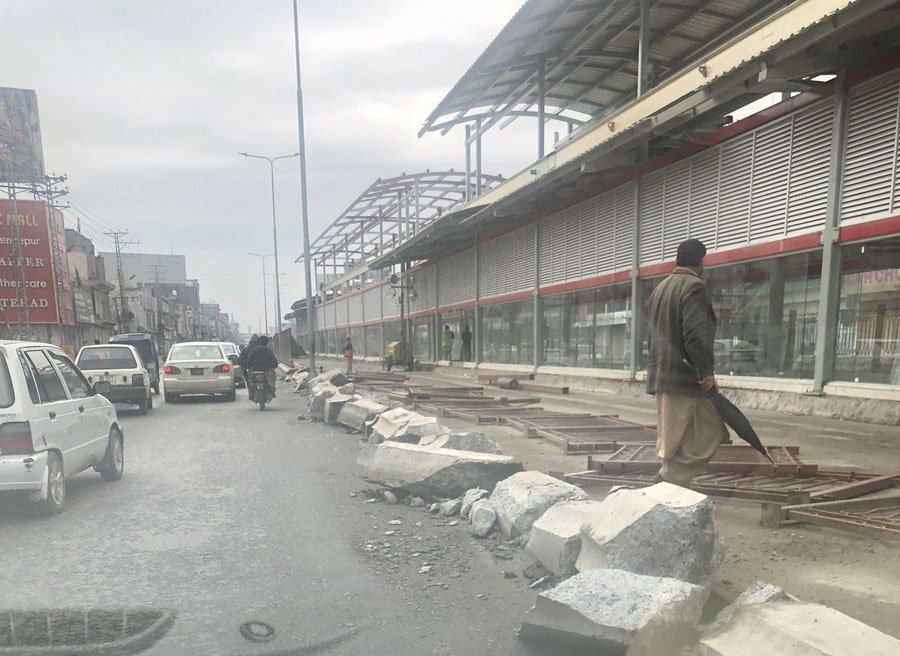 PESHAWAR: A day after a detailed verdict directed a probe into the mass transit project being built in Peshawar, the provincial government has decided to approach the apex court against it.

A source with the Khyber-Pakhtunkhwa (K-P) Law Department told The Express Tribune on Friday that the provincial advocate general has prepared a writ petition which challenges the verdict of the Peshawar High Court (PHC) calling for the Federal Investigation Agency (FIA) to probe alleged irregularities in the Bus Rapid Transit (BRT) project being built in Peshawar and to identify those responsible for malpractices, if any.

The source added that an appeal against the PHC verdict will be submitted before the Supreme Court next week.

The main argument on which the province is basing its appeal is that the chief anti-corruption watchdog, the National Accountability Bureau (NAB) is already investigating the project and that a stay order on that probe is already in effect from the top court itself. Hence, the province aims to argue that there is no need to direct another agency to probe the project.

K-P Advocate General Shumail Ahmed Butt told The Express Tribune that he has already drafted the writ petition but will be presented to the government for approval. Once approved, he said that the provincial law ministry will file the petition before the top court next week.

Butt said that petition takes up seven questions with the PHC verdict. This includes the fact that the apex court had withdrawn the authority of high courts to take suo-moto notice of issues. Moreover, the government aims to argue that the contractor hired to build the BRT was not blacklisted as stated in the verdict.

In its detailed verdict released on Thursday, the PHC had sought a fresh probe into alleged irregularities in the project.

The PHC bench, headed by Chief Justice Waqar Ahmad Seth, had instructed the FIA to submit its findings within 45 days, and take action against the officers involved.

Work on the 27-kilometre project began in 2017 under the provincial government led by the Pakistan Tehreek-e-Insaf (PTI). It was expected to have been completed in eight months at a cost of Rs49 billion. However, the project faced delays. Over two years after work on the project began, it remains incomplete. Changes to the design of the project mean that its cost has swelled to nearly Rs66 billion.

In its order, the court termed the PTI government “visionless” for concentrating money obtained as a loan from the Asian Development Bank (ADB) for just one project in a single city.

It further noted that no detailed feasibility study was undertaken to determine its economic, financial and technical viability before starting work on the mammoth project “which is why the design [of the project] has been repeatedly changed,” stated the judgment.

The project’s per kilometre cost currently stands at Rs2.427 billion, which is “exorbitantly high.”

The court also observed that senior officers of the provincial government including the additional chief secretary and Peshawar commissioner are enjoying hefty allowances on the pretext of the project even though they have no managerial roles in the project. “The PC-1 contains lavish salaries for non-project staff like additional chief secretary and principal secretary to the chief minister who do not have direct roles,” the order read.

Even the consultants pocketed hefty salaries, which the court called a “sheer waste of government’s money.” To make matters worse, these consultants misguided the government.

“The consultants calculated the value of ridership as Rs340,000 which is higher than the ridership of Lahore, where, after five years, it stands at just Rs150,000,” Chief Justice Seth noted.

The hiring of a controversial firm was also questioned and objections were raised over the provision of expensive vehicles to the transport secretary, the Peshawar Development Authority (PDA) director-general and the commissioner while the IT project was given to a figure close to the provincial government.