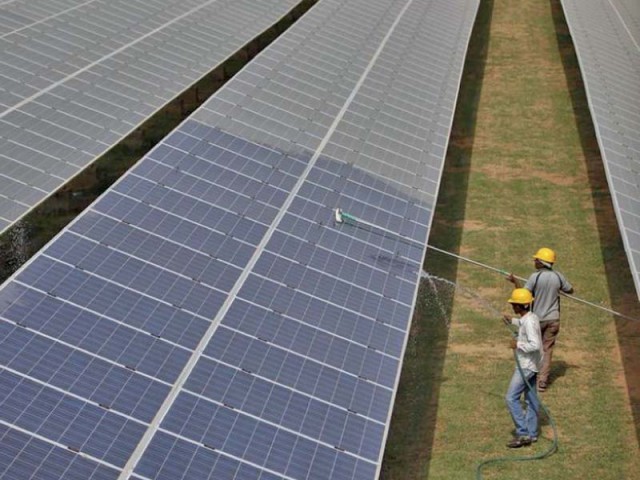 The 50MW project is part of the planned 400MW solar power park in Sindh that is estimated to attract investment of around $250 million. PHOTO: REUTERS

KARACHI: Pakistan is entering into a new era of attracting power projects through competitive bidding to provide cheaper electricity to end-consumers, as Sindh government is all set to auction the first-ever project through the bidding process by March 2020.

To date, the country has attracted power projects by offering incentives to investors under the cost-plus tariff formula, which ensured a fixed internal rate of return (IRR) to investors.

The achievement of surplus installed capacity of power production in recent times allowed authorities to make a shift towards new power projects through the tariff-based competitive bidding.

The 50MW project is part of the planned 400MW solar power park in Sindh that is estimated to attract new investment of around $250 million. “We aim to auction all the potential 400MW solar power projects by 2021 and start supplying electricity to the national power grid within the next five years (2023-24)” he said.

In this backdrop, the Energy Department of the government of Sindh appointed a consortium of foreign and local advisers to auction the 400MW power projects on Friday.

On behalf of the government of Sindh, Qasim inked the contract with the consortium to hire its services in the presence of Provincial Energy Minister Imtiaz Ahmed Shaikh at Energy Department.

The project director hoped the solar projects would attract an investment of around $250 million, considering the country has recently attracted $38 million investment for a 50MW solar project under the old formula of cost-plus tariff.

“We are highly hopeful the projects will provide cheaper and clean energy in the country,” he said.

Earlier, the National Electric Power Regulatory Authority (Nepra) had announced an upfront tariff of 5.23 cents per unit (Kilowatt per hour) to attract solar projects under the old formula of cost-plus tariff. “The competitive bidding will surely attain a comparatively cheaper tariff than the upfront tariff,” he said.

The competitive bidding process allows the Sindh government to accept the lowest tariff-bid from new potential investors. Later-on, it may ask other investors to match the lowest bid to become part of the 400MW solar park.

He said the investors would offer the much cheaper tariff than the upfront one, as cost of solar power projects has massively gone down over a period of time.

Solar remains one of the low-cost sources of electricity generation in the energy mix in the country. More importantly, the federal government has planned to increase the share of solar power to around 25% by 2025 compared to around 4-5% at present.

Qazi said the demand for electricity has been increasing by 5-7% per year. “The surge in demand may come comparatively higher and quicker considering the country is set to see acceleration in economic growth going forward.”

The surplus in the installed power production capacity became possible under the multibillion dollar power projects set up under China-Pakistan Economic Corridor (CPEC) in recent years. The power transmission and distribution network is, however, yet to be improved to end hours-long power outages in the country.