The Kenyan Red Cross said 11 surviv­ors had been recove­red from the flatte­ned block in Tassia estate­
By AFP
Published: December 6, 2019
Tweet Email 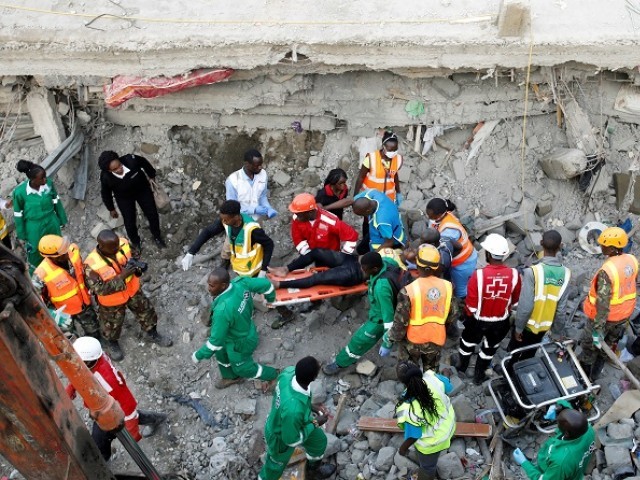 Crowds of people watch as rescue teams search the scene where a building collapsed in Nairobi, Kenya. PHOTO: REUTERS

NAIROBI: Three people died on Friday and many more were feared trapped after a residential building collapsed in the Kenyan capital Nairobi, sparking a panicked search for survivors beneath the rubble.

Onlookers swarmed the twisted ruins of the six-floor building, using their bare hands to pull injured people coated in dust from beneath the huge slabs of concrete.

The Kenyan Red Cross said 11 survivors had been recovered from the flattened block in Tassia estate, a densely-populated neighbourhood near the international airport.

At least three people have been confirmed killed, said Nairobi Regional Commissioner Wilson Njenga. He put the number of those rescued at 21.

The search was ongoing, with specialised rescue crews and heavy earth-moving equipment mingling with volunteers and onlookers trawling through the wreckage.

It is not clear how many people were in the building at the time, or how many may still be trapped, but there were 57 units in the structure.

It was just the latest housing collapse in Nairobi, where shoddy construction and flouted regulations have resulted in deadly accidents.

Kenya is undergoing a construction boom, but corruption has allowed contractors to cut corners or bypass regulations.

In September, seven children died and scores were injured when a school collapsed in an accident blamed on third-rate construction.

In April 2016, 49 people were killed when a six-floor building crumbled in the north-east of the capital.

Two killed, shooter dead at US navy base attack