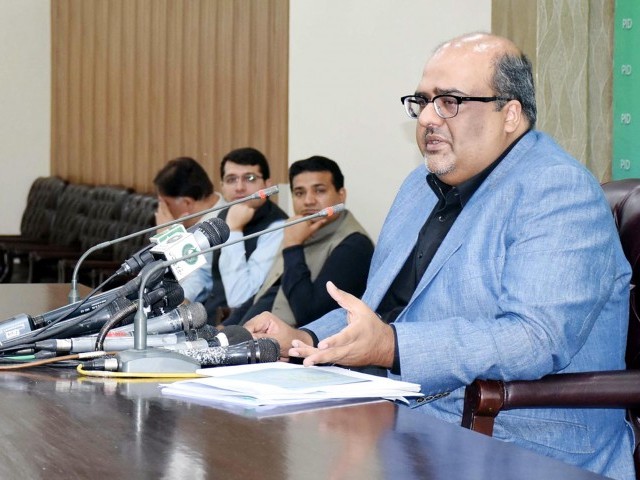 ISLAMABAD: Shehbaz Sharif’s blistering salvo at Imran Khan triggered a searing rejoinder from a top aide to the prime minister who on Thursday accused the PML-N president of laundering money to amass a fortune.

“The assets of Shehbaz Sharif have multiplied 70 times in the last 10 years,” claimed Shahzad Akbar, the special assistant to the prime minister on accountability, at a news conference which came a day after Shehbaz blamed the “NAB-Niazi nexus” for concocting corruption cases against the Sharif family.

“A sophisticated network of money laundering was run at the Punjab Chief Minister Secretariat under the patronage of the then chief minister Shehbaz Sharif,” Akbar alleged. Shehbaz challenged on Wednesday that he would “quit politics for good” if the government proved allegations of financial corruption against him and his sons.

“As much as Rs7 billion or more had been laundered using just one company, Good Nature Trading Company (GNTC), through 200 fake telegraphic transfers (TTs) and assets of Shehbaz’s son Suleman multiplied 8,000-plus times in the last one decade,” he said.

Akbar claimed that a new business empire was set up using the money laundered through a network of fake TTs, which was separate from the Sharif family’s business of Ittefaq Group.

Sharing details of alleged money laundering, he said Shehbaz had established the GNTC – a fake company – and appointed his front-men, Nisar Gill, as director political affairs at the CM Secretariat and Ali Ahmed as director policy – who laundered money on behalf of the Shahbaz family.

The fake company was actually run by Suleman which did a business worth Rs7 billion, that too on papers. Two more characters – Shoaib Qamar and Mansoor Anwar – were also involved in the money laundering network as cash boys, he alleged.

“They used to deposit money in different accounts. They withdrew Rs2.1 billion in cash from the GNTC accounts. Rs16 million was deposited in the account of Shehbaz, who then transferred the money to his wife Tehmina Durrani, and the same amount was used for purchasing property in Whispering Pines Villas.

“The cash boys deposited Rs25 million in Suleman’s account after withdrawing the amount from the GNTC. Another amount was transferred to account of Hamza [Shehbaz’s political heir] who transferred it to the account of his wife and used the money to purchase properties in Johar Town, Lahore,” he added.

“The remaining amount was stashed away through TTs. The whole process was done on papers.”

He said Rs6.8 billion was withdrawn from the GNTC accounts and then Rs4.7 billion was injected into another company. The control room was in the Chief Minister Secretariat and some more characters of the money laundering network would emerge soon, he added.

He said he was waiting for Shehbaz to sue Daily Mail – the British daily which published an article against the PML-N president – to preserve the honour and dignity of Pakistan and its people. “Would you like to tell, Mr Shehbaz, when will you sue Daily Mail journalist David Rose?”

Posing 18 questions to Shehbaz, he hoped that the PML-N president would give answers.

He said details of 190 million pounds (Rs39 billion) recovered by Britain’s National Crime Agency (NCA) could not be divulged as Pakistan has to honour a deed of confidentiality committed with the UK.

“This is a civil repatriation and record success of the government of Pakistan. The UK government has transferred the recovered amount [to Pakistan].” To a question, he said civil recovery was easy in the UK and the government was working on it.

Akbar said salaries of NAB officials have been increased three times to enable them to concentrate on their duties. “I am trying to improve working conditions of the Federal Investigation Agency (FIA) for better results,” he added.

He said plea bargain option exists for former prime minister Nawaz Sharif as the government wants to recover the money and does not want to keep anyone in jail.