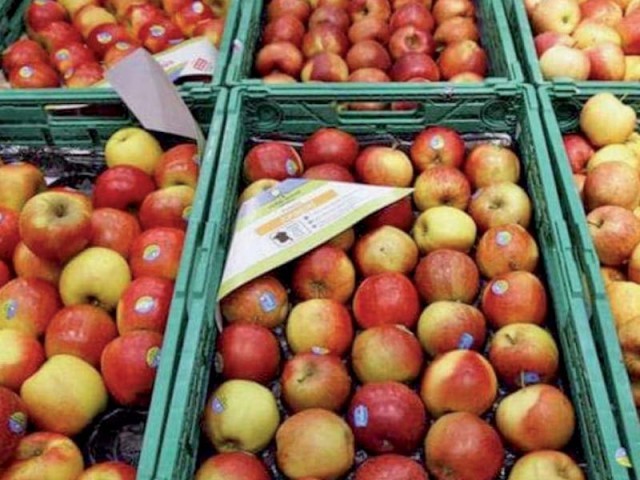 The official said apples are exported from Iran to Afghanistan and then sent to Pakistan from Afghanistan. PHOTO: REUTERS

PESHAWAR: At a time when the federal government is struggling to overcome the ongoing fiscal crisis that grips the country, it appears that the national exchequer lost an estimated $6.09 million in taxes on apple imports, that too during the last season alone.

According to the Sales Tax Act 1990, imports of edible goods from Afghanistan are exempt from tax collection, whereas other countries have to pay 17% per kilogramme (kg) as duty on their exports to Pakistan, including the apples imported from Iran.

It has, however, been learnt that traders have been avoiding taxes by documenting Iranian apples as imports from Afghanistan. Apples are sent  from Iran to Afghanistan and later are exported by Afghan traders to Pakistan.

“Apples from Iran are smuggled to Pakistan and documented as imported from Afghanistan to avoid 17% duty,” a senior official responsible for collecting tariffs told The Express Tribune. The official, who requested anonymity, stated that mafia has been involved in the ongoing mega-tax dodge.

The statistics obtained carry details of only one season of apples from Afghanistan, beginning from November 2019 until December 2, 2019, which showed that an estimated 1,750 trucks full of apples, carrying an average of 27 metric tons or 27,000 kg of the fruit per truck, were cleared into Pakistan.

“Suppose if one kg of apples approximately costs Rs120, 17% tax, which makes around Rs20, is collected on the Iranian apples. However, if the documents are forged and declared as ‘imports from Afghanistan’, there is zero tax levied on the apples and Rs20 per kg is lost by the national exchequer,” another senior customs official said.

The official, who also requested anonymity keeping in view the sensitivity of the issue, stated that if Rs20 is avoided on per kg of apples, it makes Rs500,000 per truck since it carries 27,000 kg of apples. If we multiply Rs500,000 with 1,750 trucks that were cleared into Pakistan during the last season, the duty loss is estimated at Rs945 million.

He admitted that apples are exported from Iran to Afghanistan and then sent to Pakistan from Afghanistan where traders, along with some corrupt customs officials, are involved in corruption.

“A senior government official has said that because of the practice, an estimated $6.09 million – the equivalent of approximately Rs945 million – of duty is evaded on apple imports from Afghanistan,” he said.

The official also said that the government has been trying its level best to overcome the financial crisis but illegal imports continue to make things difficult.

“The government must take immediate action against the culprits since the season is currently underway and tons of apples are being imported from Afghanistan through tax evasion,” he said.

Officials, however, stated that it is not known for how long such practices have been going on.

“The culprits did the job surreptitiously and we would never be able to find it out had a truck full of Iranian apples, documented as imported from Afghanistan, not been seized,” one of the customs officials said.

Customs officials further said that a truck driver has been detained at Torkham Customs House where the matter is being currently investigated. The Express Tribune made repeated attempts to contact senior customs officers, however, no one could be reached for an official version.