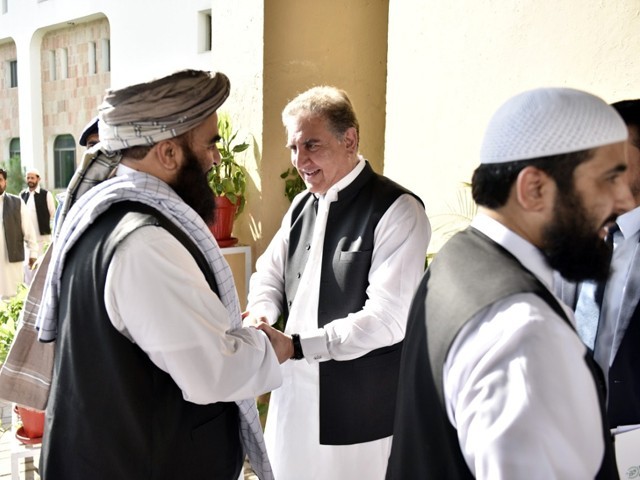 Pakistan is believed to have played a key part in persuading the two sides to restart the process. PHOTO: FILE

ISLAMABAD: Three months after President Donald Trump abruptly called off peace talks with the Afghan Taliban, the United States is all set to resume the dialogue process with the insurgent groups in Doha later this week.

The development came as US chief negotiator Zalmay Khalilzad, on his way to Doha, made a surprise stopover in Kabul on Wednesday to take the Afghan government into confidence over Washington’s decision to restart the stalled peace process.

A statement issued by the US State Department said Khalilzad’s visit to Kabul was a follow up on President Trump’s recent visit to Afghanistan and to discuss the way forward in already accelerated efforts to get all parties to the intra-Afghan negotiations.

“In Doha, Ambassador Khalilzad will rejoin talks with the Taliban to discuss steps that could lead to intra-Afghan negotiations and a peaceful settlement of the war, specifically a reduction in violence that leads to a ceasefire,” the statement added.

The resumption of talks was on the cards since the US and Taliban have been talking to each other informally. Pakistan is believed to have played a key part in persuading the two sides to restart the process.

In September, the two sides were close to signing a peace deal but Trump pulled out of the process at the last minute citing Taliban’s continued attacks targeting the American soldiers.

Before pulling the plug, Trump was scheduled to hold a secret meeting with the Afghan Taliban delegation at the Camp David. He, however, cancelled what would have been unprecedented meeting just on the eve of anniversary of 9/11 attacks, which Washington said planned and originated from Afghanistan.

The reason Trump had a second thought of signing peace deal was the criticism he faced both at home and even from the Afghan government that the Taliban had offered little concessions in return of US agreeing to withdraw troops.

The draft agreement was to deal with the timeline of US troops withdrawal while a commitment from the Taliban of not allowing the Afghan soil to be used by terrorist groups against other countries.

However, there was no word either on the ceasefire or intra-Afghan dialogue in that proposed deal. After walking out of the process, Trump then stepped up campaign against the Taliban in order to talk to them from a position of strength.

Pakistan, which facilitated the 9-month long painstaking peace process in Doha, has pushed for the resumption of talks since it believes that use of force by either side would not resolve the lingering conflict.

In October, it hosted the Afghan Taliban delegation led by Mullah Abdul Ghani Baradar. It also arranged a meeting between the US special envoy and the visiting Taliban delegation. There were no details shared by either side of that meeting held in Islamabad but sources familiar with the development that the focus of discussion on the ceasefire or at least reduction of violence by all sides.

Sources said some progress was made during the informal talks between Taliban and the US on the issue of reduction in violence.

Taliban throughout the peace process have maintained that they would discuss the ceasefire and intra-Afghan dialogue only once their deal with the US is finalised.

Pakistan as well as other players including China have been trying to persuade the Taliban to show flexibility in their approach.

The Afghan government also demanded a one-month ceasefire from the Taliban or at least during the time when peace process would be under way.

Both the US and Afghan government have been pushing for a ceasefire not just to create the conducive environment for peace deal but also to assess if the Taliban leadership has any control over their foot soldiers.