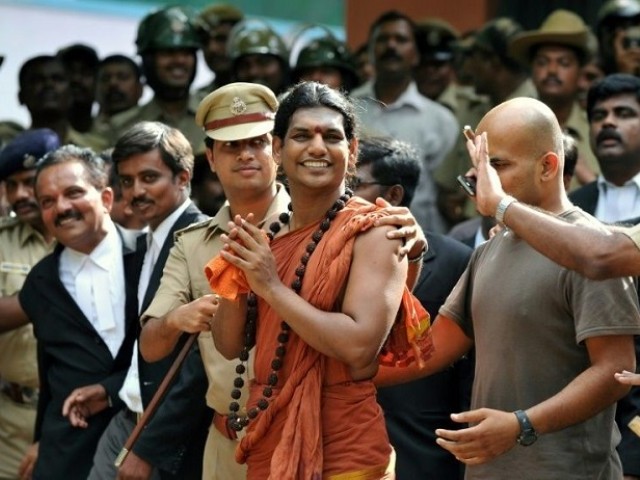 Police escort controversial Hindu Godman Swami Nityananda (centre) in 2012 after he appeared at a bail hearing in Ramanagar District, some 50 kilometres from Bangalore, India. PHOTO: AFP

NEW DELHI: An Indian guru facing rape and sexual abuse charges made headlines on Wednesday after he emerged from hiding and announced the birth of a new cosmic country with its own cabinet and golden passports.

Swami Nithyananda, a controversial self-styled godman with thousands of followers in southern India’s Karnataka and Tamil Nadu states, posted a video on his YouTube channel announcing the special project to his followers.

41-year-old Nithyananda announced that his country is called Kailaasa, and is the biggest Hindu nation without boundaries.

“The Hindu nation exists in cosmos,” he said in the now-viral video.
Local media reports cited a website allegedly created by the guru with details about his plans for Kailaasa, even as the police and other authorities investigating him for various criminal charges continue to remain clueless about his whereabouts.

The website shares details of different government departments and agencies in his make-believe country, including homeland security, commerce, treasury, housing, technology and one for enlightened civilisation.

It also gives Kailaasa its own triangular flag and an emblem with Indian Tamil, Sanskrit and English as its main languages.

Though not convicted, Nithyananda first made national headlines in 2010 after he was arrested and jailed for 53 days over a sex scandal involving him and a regional actress.

Subsequently, some other women also accused him of abusing them at his religious retreat in Karnataka.

Last month, a case was registered against him in the western Indian state Gujarat on charges of wrongful confinement of children.

Indian media reports said that police believe he fled the country during the investigation.

“So far what we know is that he is not in the Ashram (his retreat) here for almost a year,” a police officer told the Press Trust of India.

“This is one of the 10 to 15 Ashrams he has nationwide. His main areas of operation are Tamil Nadu and Gujarat,” he added.

In 2017, Gurmeet Ram Rahim Singh, another controversial self-styled godman, was arrested and charged over raping two of his female disciples.

His arrest led to widespread rioting and clashes in northern Haryana state that killed at least three dozen people.