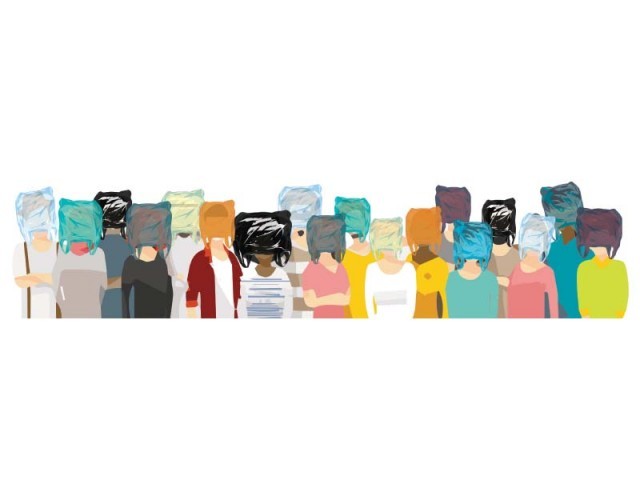 The move was aimed at raising awareness among consumers as well as ensuring that manufacturers, wholesalers and retailers had ample time to switch to alternative products.

Now, two months after the ban came into effect, plastic bags are commonly being used at shops and retail outlets across the province.

“It was an artificial ban,” commented a shopkeeper in Saddar, who asked not to be named. “It was just like the ban on gutka consumption and manufacturing,” he remarked, while chewing the same.

“No one has even visited us,” said a milk vendor in Kharadar. “We heard through the media that plastic bags won’t be available in the market anymore. But they are available everywhere,” he added.

Several other shopkeepers in the old city areas told The Express Tribune that they would not purchase the banned plastic bags if they aren’t available in the market. “We can easily purchase them. The non-biodegradable plastic shopping bags are expensive,” said one shopkeeper.

Another shopkeeper, Haji Ishaq, said that the new plastic bags would be an additional burden on consumers. “But I think it would be in our favour if the government’s orders are fully implemented,” he added. Referring to a newspaper report, Ishaq said that non-biodegradable plastic bags have created an environmental mess. “Look at the gutters. They are choked. I see people burning garbage with these bags and I can hardly inhale fresh air,” he lamented.

Meanwhile, a retailer based in Lyari, said that the factories manufacturing the banned plastic bags were functioning as per routine. “All factories are openly manufacturing the same stuff,” said the retailer, Abdul Manan. “I just heard that the police [at the start] had asked factory owners to stop manufacturing shopping bags banned by the government,” he narrated. But that too didn’t last long.

Like other shopkeepers, Manan believes that such orders by the government actually open a new door for local police. “They double their bhatta [extortion],” commented Manan.

Meanwhile, the non-biodegradable plastic bags are openly being manufactured in small factories in Shershah, Ghani Chowrangi and Saeedabad.

The Sindh government’s notification regarding the ban, issued well before the deadline, warned that anyone found selling or using the banned plastic bags would be fined. In case of continuing contravention or failure, they would be slapped with additional fines which may extend to Rs10,000 for every day the contravention continued.

Meanwhile, the Sindh Environment and Protection Agency (SEPA), which is actually supposed to implement the orders, has limited field staff. For the provincial capital, it has less than 20 persons who can raid and inspect the markets and factories. In the absence of support from the local police, the agency can hardly conduct any raids.

When reached for comment, a SEPA official told The Express Tribune that the local police were not cooperating with their teams. “We don’t have our own force and it’s always a risky job to conduct a raid or ask shopkeepers to stop using banned items,” said the official. He added, however, that several factories had shifted their production to plastic bags, weighing 30 micros or above, which do not harm the environment.

The banned plastic bags, said the SEPA official, were now being imported from Iran via Balochistan and Punjab. “We can’t keep a strong check on the borders,” said the official.

Meanwhile, the Additional Director General of SEPA, Waqar Phulpoto, said that raids have been conducted across the province, including Karachi, Hyderabad, Mirpurkhas, Sukkur, Larkana and other towns. “We don’t have our teams in all districts,” he said. “But we try our best to enforce the orders.”

Admitting that the use of banned plastic bags in the city and other areas of the province continued unabated, Adviser to Sindh Chief Minister on Environment, Coastal Development and Law, Barrister Murtaza Wahab, said that the SEPA teams couldn’t conduct raids without the support of local police.

“The public must support the government’s orders. It’s for their own interests,” he appealed.