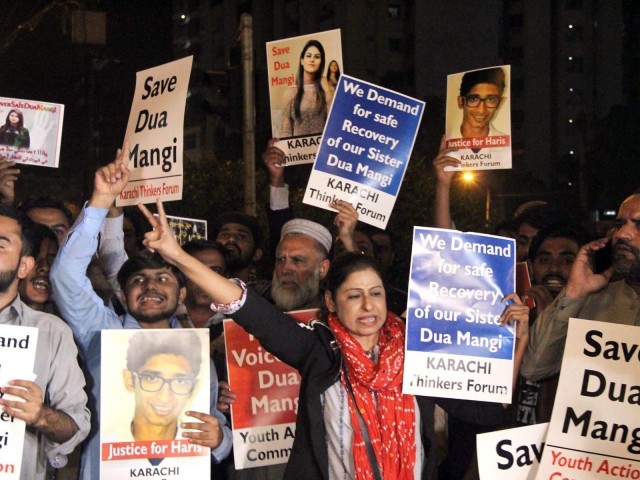 The kidnapping of a young woman from near a popular hangout spot in Karachi’s upscale Defence Housing Authority has sparked a heated debate on social media, with some users going as far as to blame the victim.

One user, Komal Shahid, pointed out that some people on the micro-blogging website were saying that the girl, Dua Mangi, deserved to be kidnapped because she wears sleeveless tops.

“Welcome to our desi society where the fingers will be always pointed towards the woman no matter what even if she’s raped, kidnapped or harassed,” she tweeted.

Dua Mangi – a young girl, got kidnapped & some people are saying that she "deserves" it because she wears sleeveless tops. Welcome to our desi society where the fingers will be always pointed towards the woman no matter what even if she's raped, kidnapped or harassed. Shameful!

Safia Dia, another user, went on to say that our society would rather victim blame than offer help.

We live in a society, where the family of a kidnapped girl have to add the lines "please don't pass judgement" while they are asking for help. They are forced to do that because this society would rather victim blame rather than actually help! :(#DuaMangi https://t.co/7Yh5t8sB31

While Najib Shaikh lamented that those victim blaming Dua “reminded us why Pakistan is in the state it is”.

So last night, someone i went to school with, Haris Fatah, was shot, and is in critical condition whilst his friend Dua has been kidnapped from a famous Dhabba in Karachi. The news was circulated to help search for Dua. But some ppl reminded us why Pakistan is in the state it is. pic.twitter.com/7XcKzCblt8

Areesha Babar, another user, lambasted those justifying predators instead of trying to protect women.

Babar also cast doubt over how men are entitled to ask a woman what she is wearing.

She also said that why is it necessary for a woman to have a male always accompanying her for her to be safe.

Men rape hens, dolphins, handicapped woman & kids they've audacity to ask what that girl was wearing? I've no Male family member if I've to leave my home at 4am night incase of any emergency. Should I be kidnapped too?We've to protect women, not justify predators.#DuaMangi angi pic.twitter.com/Yb5itmODFp

Anas Tipu came up with a novel way to stop vile comments from coming in.

He broke it down to three steps: First screenshot the comment, screenshot their profile and then send it to their university or workplace.

3 steps to deal with shitty men in the comments that victim blame & spill bullshit, just like in Dua Mangi incident.

Mehak Zahra Shah also weighed-in sharing a screenshot of the vile comments being shared saying,”Raise your male children well please!! Save our world from such beasts!”

Raise your male children well please!! Save our world from such beasts! #DuaMangi #PriyankaReddy pic.twitter.com/jZYrSDJoW9

The incident occurred at around 8pm on a secluded road near the popular open-air tea cafes in the area.

The kidnapped woman, Dua, was walking with her friend, Haris, when four to five persons in a car attempted to force her to get in their vehicle.

When Haris resisted, they shot him and sped off with Dua.

Soon after the incident, multiple posts went up on social media, informing the public and the authorities of the incident.

A report has been registered at Darakshan Police Station against unidentified men, under sections of the Pakistan Penal Code pertaining to kidnapping and attempted murder on behalf of the injured man’s father, Abdul Fatah.