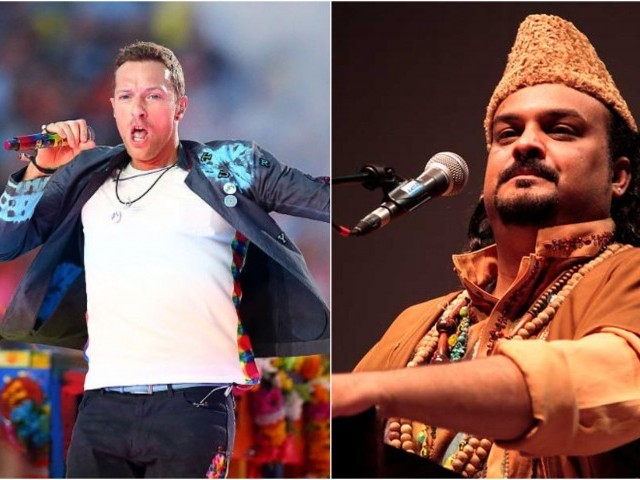 The late Amjad Sabri had fans across Pakistan, no doubt about that. But did you know he enjoyed quite a following all the way in England too? So much so, the singer has been featured on renowned British band Coldplay’s latest album, Everyday Life.

In a recent interview with Entercom, Coldplay’s lead singer Chris Martin spoke about what inspired him into make it. He also shed light on all the different people who worked to make their latest outing possible. While discussing the song Church, Martin revealed he and the rest of the band have incorporated samples from Sabri’s popular track Jaga Ji Laganay into it.

He introduced the Qawwali legend in his interview saying, “There’s two cool other singers on that one. There’s this guy who was a Pakistani singer called Amjad Sabri. He was sadly murdered by people who didn’t like what he stood for. Then there’s a friend of ours called Norah, who is a guy from Jerusalem.”

Martin then paid tribute to the artists by acknowledging their craftsmanship and sheer talent. “I’m the third-best singer on that track,” he joked.

Everyday Life has already made it to the top of the Official Album Charts. With its eighth consecutive album, Coldplay clearly aims to reach new heights, cancelling out Robbie Williams’ new album in the process.

The record comprises two halves, with the first being ‘Sunrise’ and the other being ‘Sunset.’ Church, on the other hand, revives the sound of their 2008 super hit Viva La Vida with Martin’s voice playing in loops alongside Sabri’s samples to the end of the song.

Nearly two years after Sabri was gunned down in Karachi, the devotional music of the Sufi mystical sect is struggling to survive, as fears of sectarianism and modern pressures slowly drown out its powerfully hypnotic strains. Thousands poured into the streets near his family home for his funeral, a rare public display of affection in Karachi.