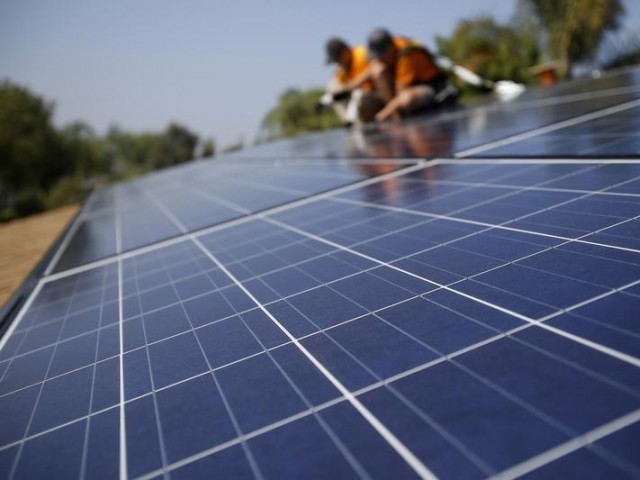 ISLAMABAD: The government is working hard on eliminating circular debt in the power production and supply sector as the pace of increase in the debt has gone down to only Rs10-11 billion a month from the previous Rs39 billion per month, the Power Division minister said.

“By December 2020, the country’s circular debt will drop to zero,” said Omar Ayub Khan on Monday.

He announced that the government was planning to install floating solar panels on the country’s big water reservoirs and along canals in a bid to generate thousands of megawatts of clean energy.

This is part of the government’s plan to give priority to an increase in the share of renewable energy in the total energy mix.

He revealed that floating solar panels would be installed on Tarbela, Mangla, Ghazi Barotha and Khanpur reservoirs besides canals. “It will not only help to reduce evaporation of water but will also generate electricity,” the minister emphasised.

Speaking at a conference on “Water Crisis: An Imminent Danger to Pakistan’s Stability”, Khan warned India that Pakistan would swiftly retaliate if New Delhi violated the Indus Waters Treaty.

“If India tries to make the Indus Waters Treaty as a weapon, then answer from Pakistan will be swift as we will defend our sovereignty.”

He urged the international community to take notice of Indian atrocities in the occupied valley of Kashmir.

He was of the view that if proper investment was made in the water sector, especially in water storages, then it had the potential to take up the country’s gross domestic product (GDP) growth by one percentage point.

Despite its importance in economic growth, the minister decried, no work was carried out for the construction of dams after Tarbela and Mangla and no big dam was commissioned after 1960.

“Our government is actively working on a plan to harness the water resources in order to add 18,000-20,000 megawatts of hydroelectric power to the system,” he said. The minister pointed out that the current installed power generation capacity from all sources stood at 31,000MW, which would be enhanced to 55,000MW by 2030.

He pointed out that the renewable energy policy draft was framed unanimously after consultation with all provinces, adding that the Sindh energy secretary supported the draft during a meeting of the Alternative Energy Development Board.

The cabinet has also approved the renewable energy policy 2019 and now it will be placed before the Council of Common Interests (CCI). The policy is aimed at reducing electricity prices in the country.

He underlined the need for constructing more water reservoirs for meeting future water demand of the country.