Bus crashe­d on Sunday near Taza, a town betwee­n the Rif and Atlas mounta­ins
By AFP
Published: December 2, 2019
Tweet Email 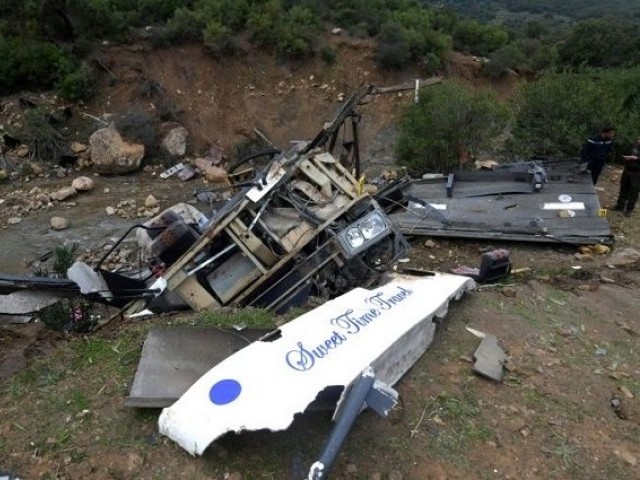 Tunisian security forces check the debris of a bus that plunged over a cliff into a ravine in northern Tunisia. PHOTO: AFP

RABAT: A bus crash in northern Morocco killed 17 people as the vehicle overturned, the health ministry said on Monday, in the second such accident in North Africa the same day.

The bus crashed on Sunday near Taza, a town between the Rif and Atlas mountains, local authorities said, with the cause of the accident unclear.

The ministry told AFP the death toll had risen to 17, while 36 others were injured.

An investigation was opened into the accident at Taza, 120 kilometres east of Fez, authorities said.

Public television 2M tweeted a photograph of the bus’s interior reduced to a mass of metal.

Elsewhere in North Africa, a bus crash in Tunisia also Sunday killed at least 26 people as the vehicle plunged into a ravine in the mountainous northwest.

Nearly 3,500 people die each year in road accidents in Morocco, a country of 35 million people.

The government has launched several road safety campaigns, particularly in the wake of the kingdom’s worst ever bus accident which left 42 dead in 2012.

A National Road Safety Strategy aims to halve the number of accidents in Morocco by 2026.