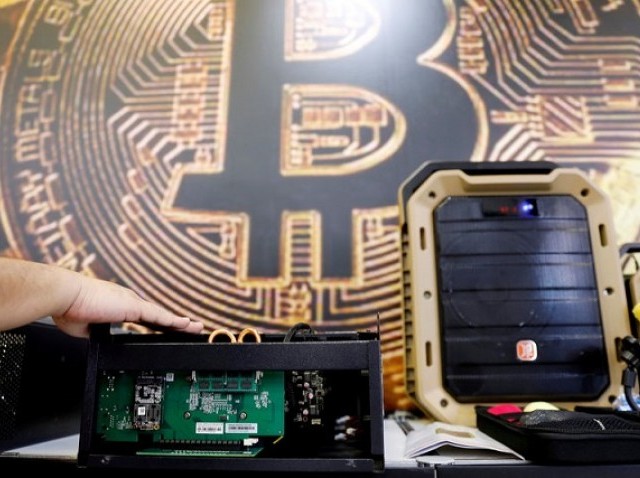 A cryptocurrency mining computer is seen in front of bitcoin logo during the annual Computex computer exhibition in Taipei, Taiwan, June 5, 2018. PHOTO: REUTERS

NEW YORK: Cryptocurrency theft has surged in 2019 compared with last year, with more money flowing through digital exchanges and criminals looking to carry out bigger heists, according to a report from blockchain forensics company CipherTrace obtained by Reuters.

“Criminals chase money and the money is right here and ripe for the taking. Little attacks are often easy to defend against, but targeted attacks are far more lucrative,” he added.

Cryptocurrencies have attracted intense regulatory scrutiny around the world, as developers and market participants in the space seek to push this asset class into the mainstream.

Two large thefts were the main drivers for the surge this year, CipherTrace said.

One of the frauds saw users and customers lose $2.9 billion from an alleged Ponzi scheme involving crypto wallet and exchange, PlusToken.

The other significant fraud this year was the $195 million that customers lost from Canadian crypto exchange QuadrigaCX following the unexpected of its 30-year-old co-founder and CEO, Gerald Cotten.

“Even without the two biggest thefts and scams, we are still witnessing many multi-million dollar crimes,” Jevans said. “There is a relatively consistent increase in criminal activity year over year and we don’t expect that to change overnight.”

He added that crimes valued under $5 million are often underreported, as exchanges and police teams focus on the bigger more existential threats to businesses.

CipherTrace reported that the sector saw just $15.5 million in quarterly thefts and scams in the third quarter, the lowest in two years.

Jevans said that while the industry may be seeing fewer reported attacks, criminals were still making out with “bigger wheelbarrows of cash.”

CipherTrace had previously noted that the type of crime in the crypto sector had shifted from outright thefts to exit scams and other frauds perpetrated by insiders, which showed exchanges have become tougher for criminals to hack.

“Today’s attackers are patient and willing to spend more time waiting for a payout,” said Jevans.

“Not only have we seen more and more $100 million thefts and scams, but those responsible are also acting carefully, only cashing out small amounts to stay under the radar.”

The report also showed that of the top 120 global crypto exchanges, 65% have weak know-your-customer (KYC) requirements.

“It will no doubt have implications as regulators seek to have KYC information shared globally,” said CipherTrace.