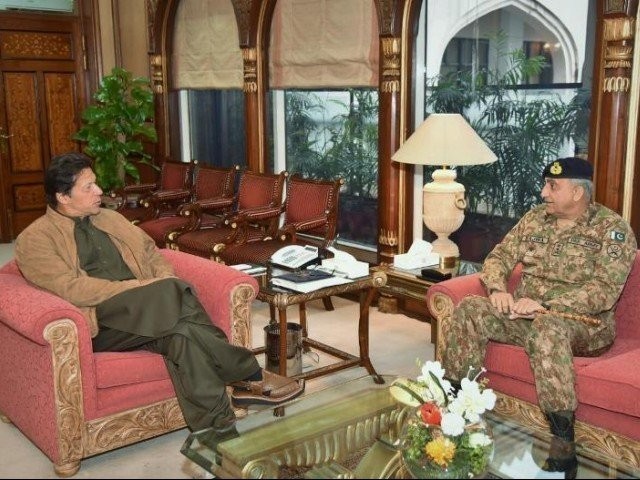 ISLAMABAD.: In order to avoid a potential constitutional crisis, the federal government on Wednesday prepared a fresh summary to extend the tenure of Army chief General Qamar Javed Bajwa.

The development came after Attorney General Anwar Mansur failed to satisfy a three-member bench headed by Chief Justice of Pakistan Asif Saeed Khosa regarding extension in the army chief’s tenure.

The new summary was drafted after Prime Minister Imran Khan convened an emergency meeting of the government’s legal team, which was also attended by the army chief and senior ministers.

The focus of the huddle was to discuss and evolve a strategy for the Supreme Court’s proceedings on the army chief’s extension.

The emergency huddle was given point by point briefing on Wednesday’s proceedings in the Supreme Court where the attorney general faced a tough time after he could not come up with convincing arguments.

There was no statement issued by the government regarding the closed-door consultations.

However, sources familiar with the development said a new summary had been prepared in line with the apex court’s observations and objections regarding extension of the army chief’s tenure.

The government reportedly replaced the word “reappointment” with “extension” in the latest summary.

The summary, it is said, would be circulated among the cabinet members for their approval before being presented before the three-judge bench today (Thursday).

Former law minister Farogh Nasim, who on Tuesday stepped down in order to represent the army chief before the Supreme Court, claimed that he along with the attorney general and PM Special Assistant Shahzad Akbar rectified all the procedural flaws pointed out by the Supreme Court in the notification.

Contrary to the public perception, Nasim insisted that there was no “crisis-like situation” as the government was assisting the Supreme Court in seeking clarification on some legal issues, which were never raised before regarding the extension of an army chief. He also told a private television channel that the army chief never wanted extension but it was the federal government and the prime minister, who thought that in view of the prevailing regional situation, there should be continuity in the army command.

Responding to a question, Nasim said General Qamar was a ‘great human being’ and that he did not seek any assurances from the government regarding Wednesday’s proceedings in the court.

In the Supreme Court, the government faced a tough time for the second day running as Attorney General Anwar Mansur failed to justify the reappointment of the army chief.

The government faced the embarrassing situation when the top judges pointed out glaring flaws between the summary sent by the PM Office and the notification issued after the approval of the president regarding the army chief’s reappointment.

The top court questioned the government’s handling of the extension issue and at one point even observed that the court would declare the extension or reappointment of the army chief as null and void if the government did not take steps to rectify those errors.

While the summary moved by the PM Office mentioned the reappointment, the final notification issued after the approval of the president talked about the extension in the tenure of Gen Qamar.

The prime minister is said to have decided to take strict disciplinary action against those who created the mess.

However, the former law minister, who attended the emergency meeting, denied such media reports.

The government is facing a tricky situation as General Qamar’s current tenure would end at midnight today. If the court proceedings go beyond today, this may lead to a possible constitutional impasse since the army would effectively be without its chief.

The attorney general; however, argued that Gen Qamar would remain the army chief till the formal change of command takes place.

Meanwhile, the Prime Minister convened a meeting of the Tehreek-e-Insaf’s parliamentary party on Thursday to discuss the evolving situation.

Serious questions are being raised about the competence of the federal government and the manner with which it handled the extension issue.