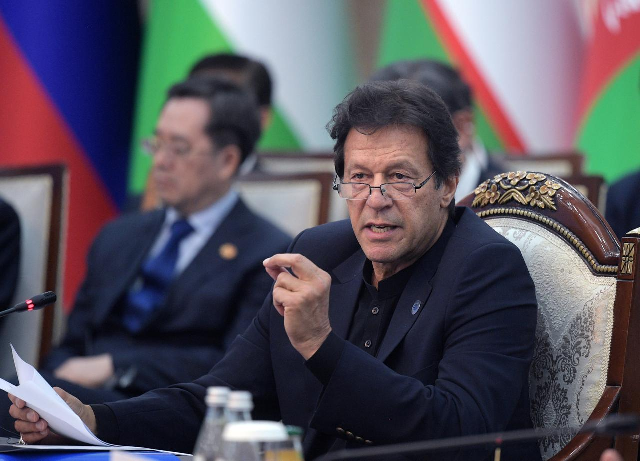 Prime Minister Imran Khan on Wednesday denounced India’s call for an “Israeli model” in occupied Kashmir, terming it a depiction of “the fascist mindset of the Indian govt’s RSS ideology that has continued the siege of IOJK for over 100 days”.

He also called out “powerful countries” for their silence over the gross human rights violation in occupied Kashmir because of their “own trading interests”.

Shows the fascist mindset of the Indian govt's RSS ideology that has continued the siege of IOJK for over 100 days, subjecting Kashmiris to the worst violation of their human rights while the powerful countries remain silent bec of their trading interests. https://t.co/ESZiaVp563

Imran’s comments came in a tweet on Wednesday morning in which he linked a report by Middle East Eye on a senior Indian diplomat’s controversial remarks at an event in the United States.

As per the report, Sandeep Chakravorty, the Indian consul general in New York, told “Kashmiri Hindus [known as Kashmiri Pandits] and Indian nationals that New Delhi will build settlements modelled after Israel for the return of the Hindu population to Kashmir.”

He asked those present “to give the [Indian] government some time to implement its plans in the [occupied] valley”.

‘Is their humanity dead’, PM questions world’s silence on Indian atrocities in IOK

“I don’t know why we don’t follow it. It has happened in the Middle East. If the Israeli people can do it, we can also do it,” the report quoted Chakravorty as saying.

“A delegation wants to go. But go to other places. Go to Syria, Iraq, Afghanistan. No one is talking about taking photos there. So why do they want to come to our place? They don’t like it now that we are now asserting ourselves,” Chakravorty was quoted as saying.

A return of the Hindu minority to Indian Occupied Kashmir has been one of the main premises for New Delhi’s move to scarp Articles 370 and Article 35A of the Indian Constitution, which barred outsiders from buying land in the occupied territory.

The Middle East Eye report described the event where the Indian diplomat spoke as “one of a number of events held at the behest of India’s right-wing government in its attempt to wrestle back contol of the narrative in the face of the immense grassroots mobilisation against its actions in Kashmir.”