Govt mulls shifting away from injectables

Govt mulls shifting away from injectables 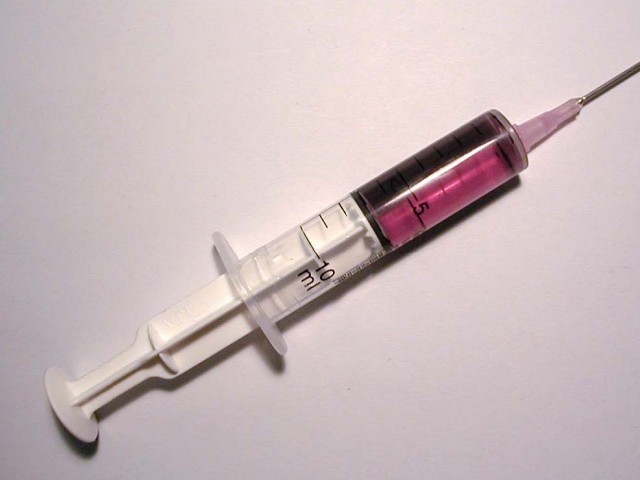 ISLAMABAD: After a slew of HIV and hepatitis cases in the country, the government is now mulling a plan to move away from injectable drugs to orally administered ones.

This was stated by State Minister for States and Frontier Regions (SAFRON) and Narcotics Control Shehryar Khan Afridi on Tuesday while addressing the National Youth Conference on Implementation of Sustainable Development Goals (SDGs) at the Quaid-e-Azam University (QAU).

“There has been an alarming rise in the spread of blood-borne diseases through the use of syringes,” Afridi said, adding, “Poorer people living in the slums and drug users are especially vulnerable to such diseases which spread through the repeated use of syringes.”

To curb the spread of diseases through such means, the state minister said that the government was contemplating ending the use of syringes altogether and shifting to orally consumable medicines.

Talking about the human rights abuses in the disputed Himalayan territory of Jammu and Kashmir, occupied by India, Afridi said that the world needs to intervene.

He added that the Hindutva regime in India is suppressing and strangulating its minorities under its agenda of turning India into a Hindu extremist regime and that the world community must stop them.

“Pakistan will keep exposing the real face of the chauvinist regime in India and tell the world how the Hindutva regime is using oppressive tactics against its minorities,” he reiterated.

“Pakistani youth is being confused through fake news and hybrid wars but we need to defeat this anti-Pakistan propaganda through our collective resolve and will power. Let us make the whole world realise that now we are committed to implementing SDGs,” he stated, urging the youth to rise and utilize their abilities to better serve Pakistan.

Referring to the work undertaken by the narcotics control ministry, which he oversees, Afridi said that it had done a lot to help eradicate the menace of illicit drugs in the country.

“We have on our (narcotics control ministry) the credit of the highest rate of drug seizing,” he said, further claiming that they also enjoy the highest number of convictions for criminals involved in narcotics.

“Pakistan has developed one of the biggest data banks of criminals involved in crimes related to drugs and money laundering,” he said.

“Youth is the hope and future of Pakistan,” he said.

“Never undermine yourself. The youth of Pakistan is dynamic and blessed with enormous capabilities and they are shining across the world. The way our stars impress people worldwide is a ray of hope for us,” he added.

The state minister further said that they were implementing reforms which will enable state institutions to take care of the weaker segments in society.