Politicians betraying masses with false hope must be unmasked: Shujaat

Politicians betraying masses with false hope must be unmasked: Shujaat

PML-Q chief says his party will move Suprem­e Court to determ­ine which govern­ment can be blamed for rising inflat­ion
By Our Correspondent
Published: November 26, 2019
Tweet Email 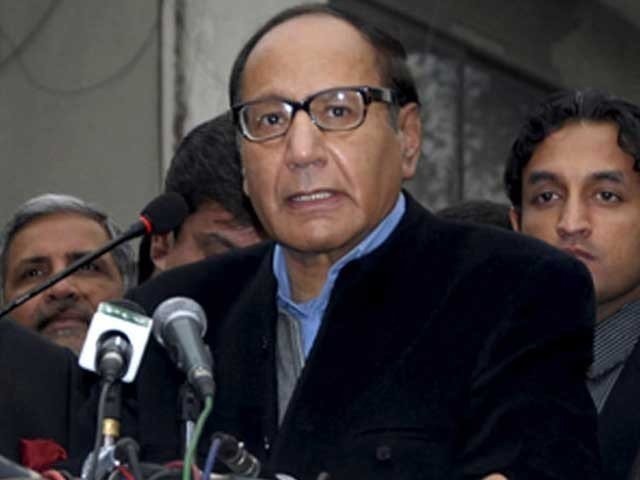 PML-Q chief says his party will move Supreme Court to determine which government can be blamed for rising inflation. PHOTO: FILE

LAHORE: Chaudhry Shujaat Hussain, the chief of Pakistan Muslim League-Quaid (PML-Q) – a coalition partner of Pakistan Tehreek-e-Insaf governments in Centre and Punjab – has said that his party was deliberating upon the option of moving the Supreme Court to identify those responsible for the rising inflation in the country.

“It is important to identify the real culprit behind prevailing inflation, unemployment and other issues that have led the country to the current situation,” Shujaat said while addressing the media in Lahore on Tuesday.

“Are previous governments responsible for these crises or is it the current one?” he asked.

The PML-Q chief said that all politicians who are betraying the masses by giving them false hope must be unmasked. “We are consulting our legal advisers for moving the apex court so that those responsible for the current mess are identified,” he said.

Criticising the PTI government for bringing the matter of former military ruler General Musharraf’s high treason case to fore again, Shujaat said the common man would not benefit from the case even if it continues for five more years in the courts. “This [case] will also not help in controlling inflation, unemployment and other crises,” he added.

On Monday, the government [prosecution in this case] petitioned the Islamabad High Court (IHC) to set aside the November 19 order of a special court trying the former military ruler for “subverting the Constitution” in 2007.

The surprise move came on a day when a Lahore High Court (LHC) bench took up a similar plea filed by Musharraf, asking his attorney to argue on the maintainability of his client’s petition on Tuesday. It is the first time in Pakistan’s history that a former army chief has faced prosecution for high treason.

Shujaat advised his coalition partners not to get involved in fresh conundrums. “Will they be able to control soaring tomato price even in next five years with such performance,” he questioned.

All political parties, the PML-Q chief stressed, must join hands to come out of the culture of blaming others and dharna politics, to which he admitted his party had also become a part of before last year’s general elections.

“Our party will set aside all differences and support any political force that will take any initiative in the country’s greater interest.”