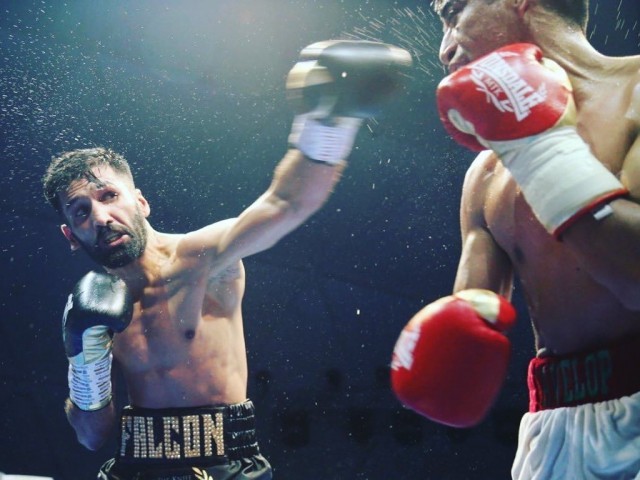 This was Waseem’s 10th victory against one loss, where he won the bout through a unanimous decision after eight rounds.

Alhamdulilah for the victory. I dedicate this win to my beautiful nation. Thank you to all my fans and supporters for the love and wishes. We move to 10-1 now#FalconWaseem #FalconvsLopez pic.twitter.com/M74GWnNjjw

The pugilist was being watched by British-Pakistani boxer Amir Khan and he later thanked him in a tweet for his support.

Thank you so much to @amirkingkhan for your support. Heard your advice whilst fighting and it definitely helped. Good seeing you brother #FalconvsLopez pic.twitter.com/ELsgwdhlVx

Waseem dedicated the victory to Pakistan and thanked his fans for the support that he receives from them.

The boxer was also congratulated by Pakistan all-rounder Shoaib Malik.

This was a tough fight and you rocked it from round 1 punch 1. Proud of you brother @iamfalconwaseem #ibleedgreen #pakistanzindabad pic.twitter.com/E0KNcu2g7T

Waseem replied by thanking Malik for always showing support towards the athletes of Pakistan.

thank you for always supporting me and all the athletes of Pakistan. I have nothing to give just Duas for you brother may Allah give your all the happiness in the world. And never stop supporting the athletes you are our strong hope and support ❤️

Earlier, before the fight, Waseem had said that was confident of beating his Mexican opponent.

‘We are here to support youngsters like you’: COAS meets Pakistani boxer Waseem

“I’m confident of stealing the show once again,” a press release quoted him as saying. “I’m very happy to be handed the chance to perform in Dubai for a second time in a row.

“I got lots of attention for my last victory and the people of Dubai seemed to love me and support me. It’s such a great place to perform and I am aiming to produce something as spectacular as last time.

He continued by thanking the fans from Middle East and Pakistan for getting behind him.

“It’s very important for me to keep making these big statements and winning in style. After that last win, people from the Middle East and at home in Pakistan are getting behind me and that gives me even more strength.”

He also praised his coach for helping him prepare for the bout.

“This camp is going great. My coach Danny Vaughan is giving me more and more strength and we’re working hard to reach our goal.

“Me and Danny have a plan and we’re going to make sure we make history by becoming world champion. I want to do it for my people and for people who admire boxing all over the world.”