If Pakist­an is in need, China would never ask to repay its loans in time, says envoy
By Our Correspondent
Published: November 22, 2019
Tweet Email 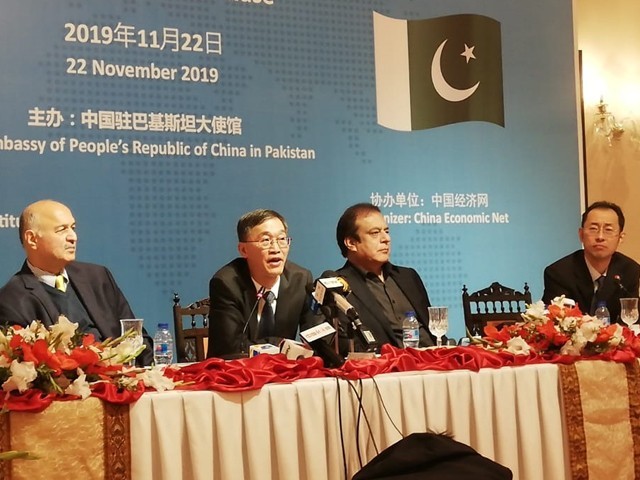 ISLAMABAD: A top Chinese diplomat has angrily spurned US criticism of his country’s multibillion-dollar infrastructure push in Pakistan as he publicly gave point-by-point reply to the objections raised by the acting US assistant secretary of state on Friday.

Alice Wells, President Trump’s aide on South Asia, warned Islamabad that it faced long-term economic damage with little return if Beijing keeps pursuing the China-Pakistan Economic Corridor (CPEC) which, according to her, would profit only China.

CPEC, heralded as a game-changer by both Pakistan and China, “is going to take a growing toll on the Pakistan economy, especially when the bulk of payments start to come due in the next four to six years,” Wells said at the Woodrow Wilson International Center for Scholars.

“Even if loan payments are deferred, they are going to continue to hang over Pakistan’s economic development potential, hamstringing Prime Minister (Imran) Khan’s reform agenda,” she added.

However, China’s Ambassador to Pakistan Yao Jing rebuffed the allegations, saying that Sino-Pak relationship was mutually beneficial and based on “win-win cooperation” for both sides. While speaking at the 5th CPEC Media Forum in Islamabad later in the day, Yao said China has always come forward to assist Pakistan in need without any political or government differences.

“If Pakistan is in need, China would never ask Pakistan to repay its loans in time,” he said while pointing out that the International Monetary Fund (IMF), which is mainly governed by the West, was strict in its repayment system. The global lending agency approved a $6 billion loan in July to help resuscitate Pakistan’s ailing economy.

Alice Wells also said that “CPEC is not about aid,” as she claimed that the United States offered Pakistan a better model. Ambassador Yao, however, questioned why the US had suspended its aid promised for Pakistan only because of political priorities.

The top US diplomat noted that CPEC was driven by non-concessionary loans, with Chinese companies sending their own labour and material. “CPEC relies primarily on Chinese workers and supplies, even amid rising unemployment in Pakistan,” she said.

The Chinese ambassador, however, rebuffed Wells’ allegation, saying that so far more than 75,000 Pakistani workers had been given jobs in the CPEC projects, while around 2.3 million jobs were expected to be created in these projects by 2030.

While acknowledging that Washington could not come to Pakistan, a historic ally of the United States, with offers from state-run companies, Wells said private US investment, coupled with US grants, would improve the troubled economy’s fundamentals.

“There is a different model,” she said. “Worldwide we see that US companies bring more than just capital; they bring values, processes and expertise that build the capacities of local economies.”

She pointed to interest in Pakistan by US companies including Uber, Exxon Mobil, PepsiCo and Coca-Cola, with the soft-drink makers together investing $1.3 billion in the country.

Ambassador Yao welcomed the US investment offer while dismissing that China’s promises in Pakistan are limited to the development of Gwadar into a world-class port. “I would be more happy to see more investment coming from the United States in Pakistan,” he said while reiterating that China was determined to build capacities of Pakistani businessmen and industrialists to boost productivity which would ultimately help in increasing local exports.

Under CPEC, the envoy said China would provide industrial cooperation to Pakistan and for this purpose over two dozen leading Chinese and Pakistani manufacturers and industrialists were engaged to boost production and exports of Pakistan.

Ambassador Yao was “astonished” at Alice Wells’ statement of higher tariff in power plants, established under CPEC, saying that he himself had earlier briefed the US diplomat about the tariff structure of these plants and told that the tariff structure was the lowest among all the countries to whom Chinese companies provide electricity.

“When in 2013, the Chinese companies were establishing power plants in Pakistan, where was the United States? Why it did not invest in Pakistan’s power sector despite knowing that Pakistan was in dire need of electricity,” he questioned.

About the US allegation of corruption in CPEC projects, the Chinese envoy said it was easy to level allegations without evidences. He said that he himself had discussed this matter with a number of concerned stakeholders, including the National Accountability Bureau (NAB), but did not find even a single evidence of corruption in any CPEC project.

“My dear American colleague, before alleging anyone, please be careful that you have enough evidences about certain allegations,” he added.

With regard to the Main Line (ML-1) railway project that is to be executed under CPEC, the Chinese envoy clarified that the project cost is around $9 billion; however, it is only estimation and not the final cost.  “The real cost of the project will be finalised in the second stage of determining financial package of the project,” he said.

The United States has gone on the offensive against China’s Belt and Road Initiative, a signature project of President Xi Jinping which aims to build ports, highways and railways around the world. The multibillion-dollar CPEC is a part of President Xi’s BRI vision.

The Chinese ambassador sought to enlist Pakistan media’s help in nullifying the effects of propaganda against CPEC. “Media is a major vehicle of information and platform of interaction”, he said and added that “media from both Pakistan and China have already been playing a role in promoting state-to-state relations.”

Speaking at the Islamabad event, Senator Shibli Faraz, leader of the house in the Senate, said that the media was playing an important role in projecting CPEC and bilateral relations of Pakistan and China. He also thanked China for assisting Pakistan in difficult time.

Chairman Senate Foreign Affairs Committee Senator Mushahid Hussain Syed said today CPEC had become a success story only because of true relationships and the media of the two countries, which had been playing important role in negating the propaganda from certain international stakeholders.

(With additional input from APP and AFP)