Imran Khan says he will never betray the nation by cuttin­g deals with corrup­t politi­cians
By ​ Our Correspondent
Published: November 22, 2019
Tweet Email 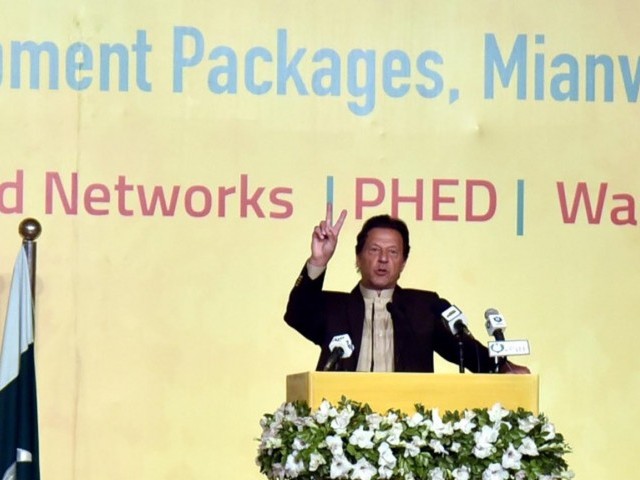 MIANWALI: While British medics are trying to diagnose the ailment of the PML-N supremo at a London hospital, Prime Minister Imran Khan on Friday said “the body language of Nawaz Sharif betrayed his medical condition”, which his Pakistani doctors claimed was “very critical”.

The 69-year-old Sharif family patriarch was flown to London in a Qatar Airways air ambulance earlier this week after the Lahore High Court scrapped a condition set by the government to allow him to travel abroad for treatment of his condition which was initially diagnosed as ITP, a bleeding disorder.

However, the social media images purportedly showing Nawaz’s departure from Lahore have cast doubts on his doctors’ claims, with many questioning how a “critically ill” person could climb the stairs unaided to board the airplane!

“Contrary to his medical reports which reportedly suggested his heart, lungs and platelets were in a critical condition, he suddenly seems to be in good health as he boarded the plane for London,” Premier Imran said while speaking at the launch of work on seven mega development projects in his home district of Mianwali.

These projects include a mother and child hospital, a bulk water supply scheme for the Khattak belt and Isa Khel, restoration and widening of urban and rural roads in Mianwali, Phase 1 of the dualisation of Sargodha-Mianwali Road, and restoration of Water Supply Scheme as well as the upgradation of existing schools and the construction of new ones in Mianwali.

The prime minister also inaugurated a water sports and tourism club in Mianwali, a full-fledged tourist resort with 21 water boats and 30 rooms for accommodation.

In his speech, the prime minister said that a local government system envisaged by his government for Punjab and Khyber-Pakhtunkhwa would empower the people at the grassroots level.

Rubbishing the opposition’s criticism, the prime minister said his government had overcome the current account and fiscal deficits left behind by his predecessor,  and said inflation had increased due to the devaluation of the rupee which had been caused by the deficit his administration had inherited.

Expressing pride in his economic team, Imran claimed that business was growing, the stock market improving and domestic and foreign investment pouring into the country.

He also said that the political parties that had recently staged a so-called Azadi March were concerned about the country. Instead, they were worried about their own political future, he added.

“Such Mafias always resists change and have convinced previous rulers to withdraw cases against them in return for political support,” Imran said. “But Imran Khan is not here to protect his position but to bring about a change, and the change will not occur unless these mafias are defeated. Otherwise, there is no future for the country.”

He further said the rupee had been devalued because of money laundering through ‘Hundi’ or ‘Hawala’ and questioned as to why the members of the Sharif family had absconded and were not facing the courts.

The prime minister also told the gathering that, upon being challenged by the opposition, he had produced 60 documents before the court in 10 months and proved the money trail of his property in London as well as his residence in Bani Gala, as opposed to the opposition party which had furnished fake documents.

He said Bilawal Bhutto-Zardari and Shahbaz Sharif had joined the JUI-F march just to pressure the government into giving up the corruption cases against them. “As long as I am alive, I will not betray my country by cutting deals with them. The youth will become my team and I will face them,” he said as the crowd chanted ‘Long Live Imran Khan’.