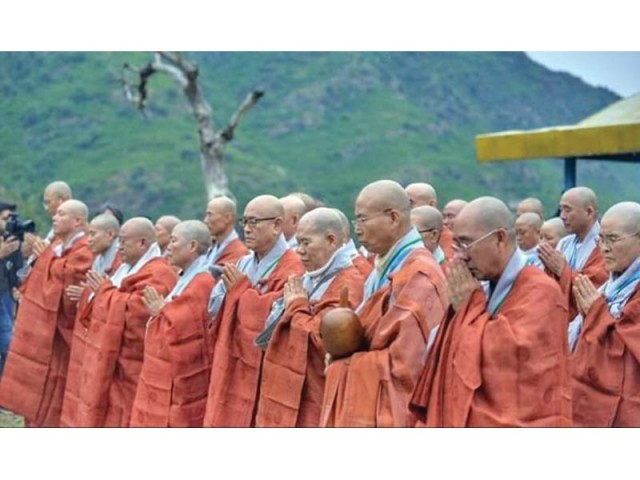 Buddhist monks from Korea perform a ritual at a historical site in Haripur. PHOTO: EXPRESS

The group was led by Ven Wonhaeng, president of Jogye Order of Korean Buddhism.

The delegation appreciated efforts of the government to preserve such religiously significant archaeological sites.

“We appreciated the efforts of the government for promoting interfaith harmony and also acknowledge the government’s support in continuing measures to promote the cause,” said delegation member Julian Bamhla, adding that this is why such a large number of Buddhist pilgrims had travelled to the country.

“The security arrangements for the religious holy places in K-P have gained our trust,” he added.

The delegation also offered special prayers for peace and security in Pakistan.

Korean Ambassador Kwak Sung-kyu expressed his satisfaction over the existing warm cultural ties between the two friendly countries and highlighted the importance of the common heritage of Buddhism and for further cementing cultural and religious ties between Korea and Pakistan.

“[The tour is a] big important step toward enhancing cultural relations between two friendly countries,” he said.

Ven Wonhaeng underlined the need to improve allied infrastructure and facilities at the heritage sites and to properly publicise Pakistan’s rich cultural and historical treasures to the world.